No winner in the US presidential race, Trump grumps about late counting

Threatens to go to the Supreme Court, Biden team standing by with their own legal team 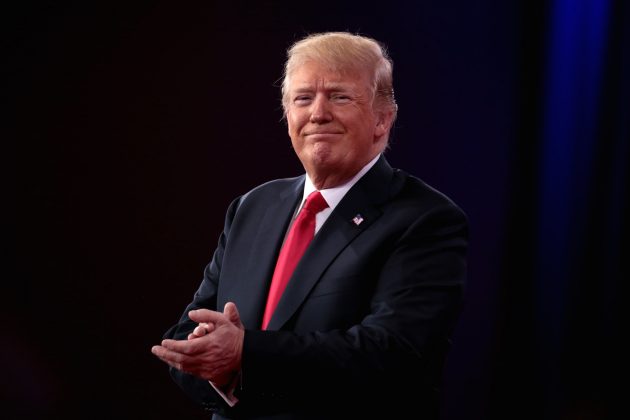 The Trump administration has been taking measure to ban TikTok and other Chinese technologies from the U.S. PHOTO: President Donald Trump/Gage Skidmore via Flickr

WASHINGTON — President Donald Trump says he’ll take the presidential election to the Supreme Court, but it’s unclear what he means in a country in which vote tabulations routinely continue beyond Election Day, and states largely set the rules for when the count has to end.

“We’ll be going to the US Supreme Court — we want all voting to stop,” Trump said early in the morning Nov. 4.

But the voting is over. It’s only counting that is taking place across the nation. No state will count absentee votes that are postmarked after Election Day.

“If the president makes good on his threat to go to court to try to prevent the proper tabulation of votes, we have legal teams standing by ready to deploy to resist that effort,” Biden Campaign Manager Jen O’Malley Dillon said in a statement. “And they will prevail.”

Election law expert Richard Hasen wrote in Slate that “there has never been any basis to claim that a ballot arriving on time cannot be counted if officials cannot finish their count on election night.”

Ohio State University election law professor Edward Foley wrote on Twitter: “The valid votes will be counted. SCOTUS would be involved only if there were votes of questionable validity that would make a difference, which might not be the case. The rule of law will determine the official winner of the popular vote in each state. Let the rule of law work.”

In any event, there’s no way to go directly to the high court with a claim of fraud. Trump and his campaign could allege problems with the way votes are counted in individual states, but they would have to start their legal fight in a state or lower federal court.

There is a pending Republican appeal at the Supreme Court over whether Pennsylvania can count votes that arrive in the mail from Nov. 4 to Nov. 6, an extension ordered by the state’s top court over the objection of Republicans. That case does not involve ballots already cast and in the possession of election officials, even if they are yet to be counted.

The high court refused before the election to rule out those ballots, but conservative justices indicated they could revisit the issue after the election. The Supreme Court also refused to block an extension for the receipt and counting of absentee ballots in North Carolina beyond the three days set by state law.

America woke up  without a winner of the presidential election.

This isn’t necessarily a surprise. In a year turned upside down by the coronavirus pandemic, many states made it easier to vote by mail, and millions chose to do so rather than venturing out to cast ballots in person. That meant a slowdown in the tabulation of results because votes received by mail often take longer to process than ballots cast at polling places.

And the closer the margin in a state is, the more votes are needed for The Associated Press to declare a winner.

There are also roughly 20 states that allow ballots received after Election Day to be counted if they were postmarked by the day of the election. That includes Pennsylvania, one of the key outstanding states.

Some states, including Florida, began counting absentee ballots days before Election Day — and had definitive results within hours of the polls closing. The AP declared Trump the winner in Florida.

The abundance of absentee ballots also has thrown into doubt historical norms, making the arc of the race harder to determine – though one political narrative that held for sure is that the country remains evenly divided between both parties.

None of that means there is anything wrong with the results, or any reason to doubt the vote-counting process. It just means the country doesn’t know who won the presidential election for the time being.

And we don’t yet know when we’ll know.

The delay doesn’t signify a positive for one side or the other – even though it has provoked radically different reactions from each.

Biden took an outdoor stage in Delaware shortly before 1 a.m. and said the country needed more time to determine its next president, declaring, “Your patience is commendable.”

“We knew because of the unprecedented early vote, the mail-in vote, that it was going to take awhile,” Biden said. “We’re going to have to be patient until the hard work of tallying the votes is finished, and it ain’t over until every vote is counted.”

Trump spent months railing against expanding mail-in voting and suggesting without evidence that it could lead to widespread fraud, while imploring with equal fervour that the election should have a result on the same night the polls closed.

Vote tabulations routinely continue beyond Election Day, and states largely set the rules for when the count has to end.