A more detailed and accurate global model of water depth would reveal the seafloor’s shape, and the data can be used to understand seabed composition. 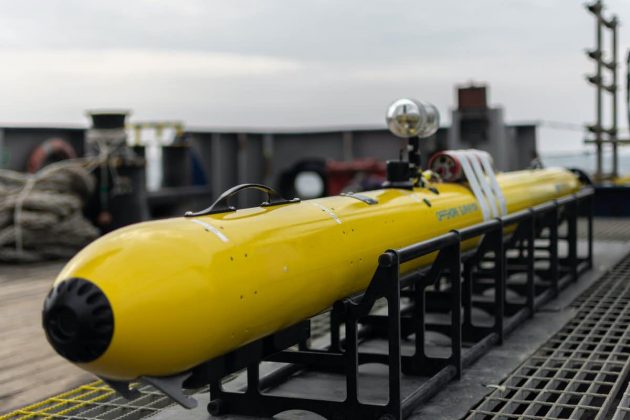 Marine scientists often feel like they’re fumbling in the dark. The global ocean covers about 71 per cent of our planet and is central to life as it exists on Earth. But only about 20 per cent of the seafloor has been directly mapped so far.

Survey ships equipped with sonars called multibeam echo sounders are being used to measure the depth of the seafloor to better understand it. But the size of the job is enormous. A single survey ship would take about 350 years to adequately map most of the seabed deeper than 200 metres, and it would take another 620 years to map the shallower areas.

We must map the ocean faster. Today, marine surveying, or hydrography, is central to major international initiatives, including one that aims to see all of the ocean floor mapped in unprecedented detail by 2030.

A more detailed and accurate global model of water depth would reveal the seafloor’s shape, and the data can be used to understand seabed composition. This will increase the safety of marine navigation, inform security and defence operations, improve oceanographic and climate studies, support various sectors of the sustainable ocean economy and guide decisions on habitat conservation. But it could also come with risks and costs.

In 2007, as an undergraduate co-op student working at the Geological Survey of Canada’s Pacific Geoscience Centre near Victoria, B.C., I helped map seabed habitats and hazards off the West Coast.

Looking at these digitally mapped areas of Canada’s undersea terrain between northern Vancouver Island and the Alaskan border was like peering out the window of an airplane. I could see prominent canyons and imposing mountains hidden deep beneath the waves. On the relatively shallow continental shelf lay the submerged remnants of coastal landforms like river banks, beaches and deltas. Indigenous peoples may have walked there when the sea level was much lower during the last ice age.

We examined the depth of the seafloor, known as bathymetry, that had been collected by the Canadian Hydrographic Service with a high-resolution multibeam echosounder mounted on the underbelly of a research ship. These sonar systems emit pings in a fan-shaped pattern and listen for returning seabed echoes. The depth of the sea is calculated by measuring the time between a ping and the return of its echo. But as sound beams spread through deeper water and “paint” more seabed terrain, the resolution of the map decreases.

The detailed bathymetry from multibeam sonar surveys off the West Coast reminded me of Star Trek’s planetary scans. But what intrigued me most were the gaps. There were vast areas, under both shallow and deep water, that lacked any high-resolution bathymetry. Mare incognitum — unknown sea.

There remain immense landscapes spread across most of our planet’s solid surface that no human has ever seen or explored.

Ocean mapping is now central to two major international initiatives, the United Nations Decade of Ocean Science for Sustainable Development (2021-30) and the Nippon Foundation-GEBCO Seabed 2030 project. The latter aims to see all of the ocean floor mapped by 2030 through voluntary data contributions by governments, industry, researchers and others. Although some governments argue it may take longer to finish detailed nearshore surveys.

Multibeam bathymetry is much more detailed than the satellite altimetry maps of seabed terrain that provide much of the background imagery for services like Google Maps. Satellite bathymetry has an average resolution of about eight kilometres — where one pixel represents an area eight kilometres by eight kilometres in size. This means that entire submarine mountains may not be captured.

Most of the elevation surface of Mars, which lacks an envelope of water, has been mapped with space probe cameras to a resolution between 0.25 metres and six metres. That means we have a clearer picture of the terrain on that alien world than our own ocean floor. However, multibeam sonar can be made into a grid with a few metres resolution or better when collected from ship surveys in shallow water or from deep seabed dives with robotic vehicles.

The Seabed 2030 bathymetry product will consist of grids that vary in resolution by depth zones. Across the deepest regions of the ocean (six kilometres to 11 kilometres), survey efforts could be distilled to a single depth value for each 800 metre by 800 metre area. For seas shallower than 1.5 kilometres, the project would determine the depth of 100 metre by 100 metre units (100 metre grid resolution).

Before the 2017 launch of Seabed 2030, only about six per cent of the ocean floor had been adequately mapped. In just five years, the compilation of detailed area has more than tripled to 20.6 per cent. Much of this rapid progress has been due to the public release of existing data.

Seabed 2030’s objectives could be met sooner if navies, petroleum companies, wealthy yacht owners and others are willing to share any of their previously unreleased bathymetric data.

Data from remote vehicles can be uploaded via satellite internet to the cloud. Then automated data processing and classification tools that leverage artificial intelligence could free up ocean mappers onshore to spend more time solving scientific and applied problems.

Society can benefit greatly from an increase in the quantity and quality of seabed data. With an upgraded map of seabed shape and texture, we’ll improve simulations of how water is steered by an irregular seabed, and how it slows due to bottom friction. This can help us make more accurate predictions about tides, tsunamis, waves and storm surges. It will also help us understand how heat transfer by ocean currents affects weather and climate.

As more detailed bathymetry is interpreted together with complimentary datasets, we’ll learn which seabed regions should be protected to conserve marine biodiversity. We’ll also discover deposits of the minerals for electric car batteries and mobile devices.

A flood of mapping data is revealing “planet ocean.” Can humanity govern it with greater wisdom than we have in the past?