An estimated 10,000 tonnes of plastic waste enter the Great Lakes every year 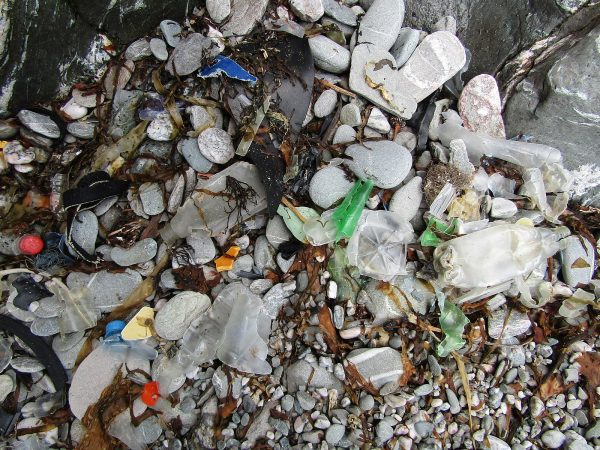 A variety of plastic litter washed up on the strandline at Ivy Cove, near Kingswear on the coast of South Devon, England. PHOTO: Wikimedia Commons

Plastic production and consumption has snowballed since large-scale production began in the 1950s. In 2020, an estimated 24 million to 34 million tonnes of plastic waste will enter the world’s lakes, rivers and oceans. That is roughly the weight of 21,000 rail locomotives.

Back in 2015, the world agreed that eight million tonnes of plastic waste contaminating the ocean alone was unacceptable. Several international platforms emerged to address the crisis, including Our Ocean, the UN Sustainable Development Goals and the G7 Ocean Plastic Charter, among others.

These are ambitious commitments, but will they meaningfully reduce plastic pollution?

New research published in Science shows that even if governments around the world adhere to their global commitments to address plastic pollution, and all others join in these efforts, in 2030 we will still emit between 20 million and 53 million tonnes of plastic waste into the world’s aquatic ecosystems. Global commitments do not match the scale of the problem — we need to rethink our strategy.

The myth of plastic recycling

Plastics are commonly tossed into mixed-recycling bins to be conveniently collected and — we incorrectly assume — remade anew. The reality is that we’re “wishcycling.” In fact, less than 10 per cent of plastics are recycled.

Virgin plastics are cheaper to produce than recycled products, undermining the viability of the recycling sector. For example, in 2019, California’s largest recycling plant closed, laying off 750 employees, because of increased business costs and falling prices for recycled materials.

The abundance of disposable plastic has led to waste colonialism — the dumping of large quantities of mixed-plastic waste in developing countries, most commonly Southeast Asia.

These practices are fuelled by policies that harken back to European colonization of the Americas. They give companies access to the raw materials used to make plastics today — oil and ethane gas — often without approval, and that directly endanger the lives of Indigenous women.

Across the globe, health problems associated with plastics production disproportionately affect lower-income Black, Indigenous, people of colour (BIPOC) communities. That’s because the bulk of the petrochemical plants producing plastics are located in communities of colour.

Thousands of toxic chemicals are used in plastics production and most are unregulated. Bisphenol A (BPA), banned from many consumer plastics, has simply been replaced with other bisphenols such as BPS or BPF, even though they maybe as hazardous to human health. Subsequently, plastics workers suffer high rates of respiratory and cardiovascular disease and cancers.

It’s no coincidence that Louisiana, a hotbed for the petrochemical sector, is the epicentre of what is known as “Cancer Alley.” Perhaps a more appropriate name would be “Cardiovascular-respiratory-illness-reproductive-disorder-cancer Alley.” BIPOC communities have been overburdened with pollution for decades, and air pollution from petrochemical plants is a leading cause of chronic respiratory illnesses contributing to greater risks of morbidity from diseases like COVID-19.

An estimated 15 million waste pickers worldwide pluck the most valuable pieces of plastic from mountains of imported waste to make their living. Often the remaining plastic is burned, belching carbon-rich smoke into the atmosphere. Everyone unfortunate enough to be in its plume inhales carcinogenic furans and dioxins. Plastics that aren’t burned or processed are piled high or buried, contaminating previously arable soils and waterways.

Progress requires us to address the structural inequality that encourages and normalizes the waste of resources, ecological destruction and the perpetuation of colonial systems.

Progress requires decolonial policies, where justice and equity are prioritized. That means the equitable investment in effective collection, sorting, cleaning, reuse, repair and recycling infrastructure, where BIPOC don’t carry the burden of pollution.

It requires policies that dissuade the unabated extraction of resources and ensure companies are responsible for the life cycle of their plastic products. This would include abolishing US$296 billion in subsidies provided annually by governments to petrochemical companies and introducing laws that require companies to pay for waste collection, recycling or disposal, rather than taxpayers.

Quantifying the scale and extent of plastic pollution helps us understand the kind of effort needed to make change, but just as vital is mapping the health, economic, cultural and human rights dimensions of this toxic industry.

By rallying for policies that tackle the underlying structures that perpetuate the plastic pollution crisis, we can reverse inequality, fulfil human rights obligations, improve the health of all communities and prevent and mitigate ecological damage. Policies like the Green New Deal are moving us in the right direction, but we need to do more.

If ever there was a time to redefine the business-as-usual plastics industry and transition to a healthy and more equitable global society, it is now.