‘Playground politics’ are anything but: For health’s sake, Ontario students need better schoolyards 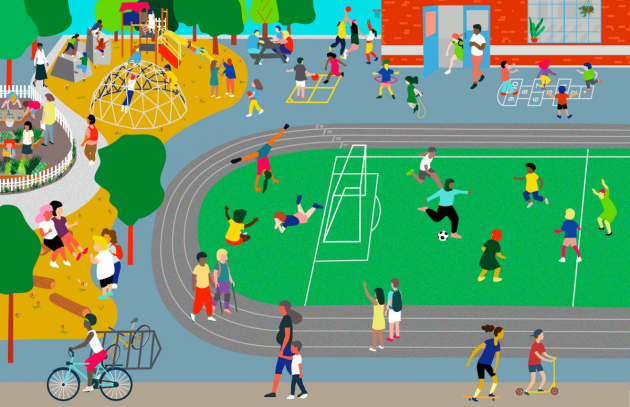 We worked in partnership with Ophea, a charity that supports physical and health education and advocates for healthy schools, to find out. We recruited students, parents and educators to take a close look at their own schoolyards as “citizen scientists” — members of the public who collect data as part of a public-interest research project.

To analyze schoolyards, we adapted a tool previously developed for this purpose. This tool was based on evidence showing a relationship between schoolyard quality and physical activity. We used it to assess approximately five per cent of Ontario’s 5,000 schools. We audited 232 schools that were broadly representative of the distribution of average family incomes, public, Catholic and French school systems, and elementary and secondary schools.

Our results, relayed in our report, Schoolyards Count: How Ontario’s schoolyards measure up for health, physical activity and environmental learning, show that Ontario schoolyards fall far short of “good enough.”

Connection between outdoor play and health

Other research points to the connection between students’ access to “everyday nature” in terms of both environmental attitudes and knowledge, and their well-being.

We know that unstructured outdoor play enhances cognitive function, promotes psychosocial development and is an important component of a healthy childhood. Our auditors assessed a quarter of schoolyards as “unsuitable” for play or games, and one in five as “unsuitable” for sports — a worrying finding.

Our research found that 73 per cent of audited schoolyards have an overall schoolyard quality score that is less than half of the optimal score of 88.

Based on our audits, we found:

10 per cent of the schools have no fields;
16 per cent have no courts for games like basketball;
13 per cent of elementary schools have no play equipment (not even a simple monkey bars or tetherball post) and a quarter of schools don’t have multi-component structures (like a combined slide, bridge and climber);
47 per cent of secondary schools have no track.
Outdoor spaces: An asset during the pandemic
The pandemic has exacerbated psychological distress and physical inactivity in Canadian children and youth, particularly in Ontario. Many recommend outdoor learning and outdoor play as a key feature in COVID-19 safety and recovery responses. Being in nature (not just wilderness, but also green spaces) leads to improvements in mental health among children.

For all too many Ontario schoolchildren, their main access to the outdoors at school is a paved, treeless expanse. In a third of schools, 50 per cent or more of the schoolyard surface is paved. Thirteen per cent of schools reported that they had no areas shaded by trees (only 20 per cent reported “lots” of shady areas). Paved treeless spaces are also a missed opportunity to mitigate climate change.

One of the most important ways the built environment of a schoolyard and school community can contribute to student physical activity is by making it easy for students to walk or bike to school.

Cycling provision is even poorer. Only 21 per cent of schools can be reached on a marked bike lane, and a third of schools don’t even have bike racks.

Just as worrying as poor overall quality is that students experience vastly different opportunities for well-being, depending on which school they attend. Overall schoolyard quality scores range from a mere 14 to a high of 61. This is despite a provincial funding formula which, at least in theory, provides comparable resources across the province.

Largely unregulated and increasingly unequal fundraising may contribute to differences in quality between richer and poorer schools, especially in the absence of clearly articulated standards for quality.

Engaging members of the public to work on projects related to our children’s health offers the opportunity to make systematic data personal. The picture we produced shows unequal and under-utilized opportunities to promote play and well-being at school.

We hope school communities can use this systematic picture to advocate locally for what they need in their schoolyards — from bike access and slower roads, to tree planting, more environmental learning opportunities or greater accessibility.

As citizens, all of us need to insist that policy ensures there are no schoolyards in our province that lack basic provisions for play such as play structures, basketball courts and supervised access to fields at recess.