The first of four bridges for Toronto’s $1.3 billion Port Lands Flood Protection project has begun its multi-stage trip to the city’s waterfront 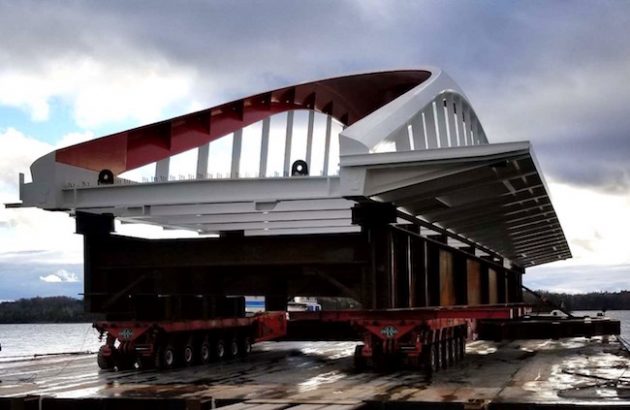 The first of four new bridges for the Port Lands loaded onto a barge in Dartmouth, waiting to set sail for Toronto. (CNW Group/Waterfront Toronto)

The first of four bridges for Toronto’s $1.3 billion Port Lands Flood Protection project has begun the final leg of its multi-stage trip to the city’s waterfront.

The 57-metre welded steel structure was loaded onto a barge in Dartmouth, N.S. and set sail for Toronto Oct. 30. It will make its way up the St. Lawrence Seaway over the next several weeks, Waterfront Toronto said.

The 350-tonne bridge is one component of a city, provincial and federal initiative to revitalize an eastern section of Toronto’s waterfront known as the Port Lands. The seven-year project, which will create a new mouth for the Don River and open up some 290 hectares to redevelopment, is being overseen by contractor EllisDon.