Former industrial land on Toronto waterfront to get $1.2B makeover

Much of the city's Port Lands once housed heavy industry, but years of underutilization has left a number of brownfield sites along Lake Ontario 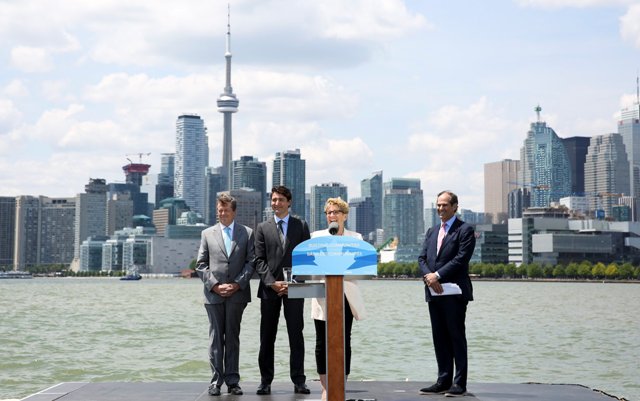 The heads of all three tiers of Toronto government were in the city’s Port Lands to announce the funding June 28. PHOTO: Kathleen Wynne/Flickr

TORONTO—A portion of Toronto’s waterfront is set to undergo a nearly $1.2 billion flood protection project that will lead to a makeover of the area.

Trudeau said global warming over the past decade has resulted in increased flooding in urban areas. He said the project will provide flood protection for 240 hectares of land through the creation of a naturalized mouth for the Don River.

“It’s estimated that as many as 1,500 jobs will be created during the cleanup and development phases,” Trudeau said.

Wynne said the project uses a model proven successful in other waterfront communities.

“We are on our way to building a new neighbourhood that will be a vibrant place to live—a hub for good jobs and economic growth, and a mixed-use community that can be accessed and enjoyed by all,” she said.

The plan calls for the long-term transformation of the Port Lands into mixed-use communities with residential and commercial development surrounded by parks and green space. Much of the area once housed heavy industry, leaving a number of brownfield sites.

The federal government will contribute up to $384 million to the $1.185 billion project, while Ontario and the City of Toronto will each contribute more than $400 million.

The project, which is expected to take about seven years to complete, will have four main components.

The second component will involve the installation of municipal infrastructure—water mains, wastewater, storm sewers—and the creation of roads and a transit right-of-way.

The third component will include the construction of three new bridges and the extension of the Lake Shore Boulevard bridge to create a wider opening over the Don River.

The final component will create a new naturalized area in the river valley, including about 14 hectares of aquatic habitat.