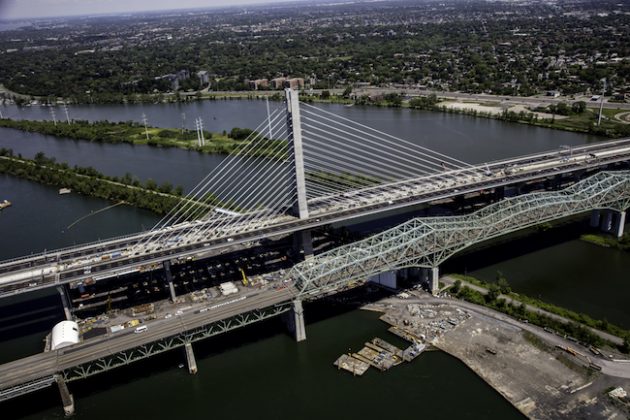 The old cantilever bridge next to the new cable-stayed span in Montreal. PHOTO: Infrastructure Canada

The piece-by-piece deconstruction of the old the Champlain Bridge, now underway in Montreal, will last nearly four years, with crews tackling the main steel section over the St. Lawrence Seaway starting next fall.

Jacques Cartier and Champlain Bridges Inc. (JCCBI), the federal agency that oversees the two Montreal bridges, detailed the timetable and for the project in a press conference earlier this month.

The briefing also revealed the construction team’s plan to take down the bridge using a range of barges, jetties, strand jacks, excavators and cranes. The Nouvel Horizon St-Laurent (NHSL) consortium, made up of Pomerleau Inc. and Delsan-A.I.M. Environmental Services Inc., signed the contract to take on the project this June and has already started work on early components.

Read more on On-site, one of Canadian Manufacturing‘s sister publications.