When the ‘freedom convoy’ set their sights on Ottawa, even though the protest was ostensibly in response to COVID-19 mandates, part of their plight resides in threats to petroculture. 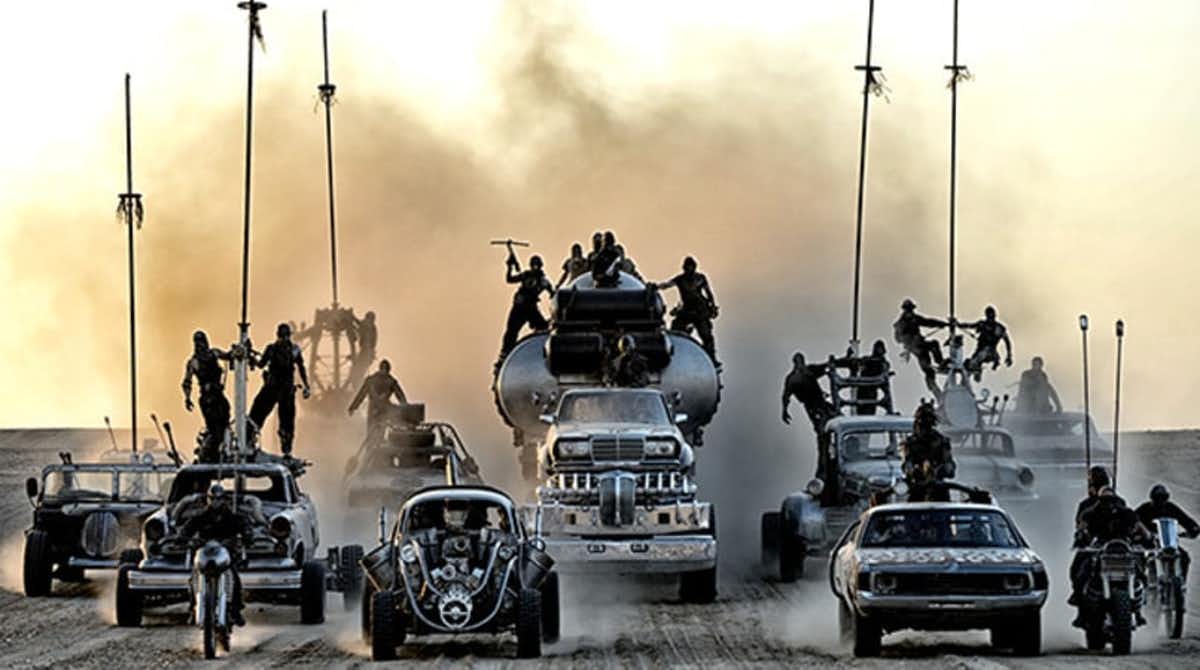 The vehicles in ‘Mad Max Fury Road’ are cobbled together from many different car and truck parts. (Warner Bros)

The media has been inundated by images of the ‘freedom convoy’ that began converging on Ottawa on Jan. 28. The convoy reflects our continued inability to find a middle ground when it comes to debates surrounding COVID-19 mandates and proposed vaccine passports.

The visuals produced by the ‘freedom convoy’ — loud, honking semi trucks and a party atmosphere — is eerily similar to the monstrous machines that rumble through the desolate landscapes in the 2015 Australian movie Mad Max: Fury Road. As a popular culture researcher, I am interested in how this similarity prompts a consideration of what continues to fuel, so to speak, these ongoing debates.

Fury Road follows Max (Tom Hardy), Imperator Furiosa (Charlize Theron) and a group of women who are used as breeding stock as they flee across a desert wasteland in search of a rumoured paradise-like haven. Defeated, they must ultimately return to the Citadel, from which they originally escaped. They are relentlessly chased by the Citadel’s dictator, Immortan Joe (Hugh Keays-Byrne) and his band of War Boys.

Immortan Joe controls access to both water and fuel. He urges his citizens not to become addicted to water, in case “it will take hold of you, and you will resent its absence.” Immortan Joe understands restraint in a world of limited resources, and he restricts access to both the water and the fuel. And in contradiction, Immortan Joe and his War Boys consume fuel excessively for most of the film.

Much of the film comprises car chase scenes typical of the Mad Max franchise, but the film ultimately ends with the characters returning to the Citadel, rendering the chase scenes relatively redundant. Fury Road gives us a glimpse into a world of dwindling fuel stocks where the only pastime is to, ironically, engage in excessive and futile car chases.

In the film, vehicles occupy a special place due to limited fuel supplies and the subsequent death of automobile manufacturing. The vehicles in the film mutate into monstrous machine hybrids. Rather than adopt alternative forms of energy or transportation, the survivors in the film create ever more dangerous vehicles — “Frankenbeasts” — and revere them.

What the Mad Max franchise — and Fury Road in particular — really gives us is a warning about our over-reliance on fossil fuels.

Petroculture refers to the ways in which our lives revolve around fuel, not just in our cars and pipelines and generators, but seeping into all aspects of our very existence. As such, we have trouble imagining a world that is beyond fuel — post-apocalyptic films embody this limitation.

When the ‘freedom convoy’ set their sights on Ottawa, even though the protest was ostensibly in response to COVID-19 mandates, part of their plight resides in threats to petroculture.

The protest was sparked by the recent announcement that truckers require proof of vaccination to cross the U.S.-Canada border. This limitation to the open road suggests that the “freedom” within the ‘freedom convoy’ is really about the privilege to drive — perhaps across a borderless, unregulated landscape similar to the one in Fury Road.

Fuel supplies to the truckers have been seized and Ottawa police warned that anyone caught bringing in fuel would be arrested, and an oil tanker was removed. In targeting the fuel, the Ottawa police reinforce the threats to petroculture, and arguably, their tactics would not be successful without the already strong reliance on fuel that dominates our country.

The most valuable commodity

In the first film in the Mad Max franchise, Max becomes “the fastest thing on the road” after the deaths of his wife and son. He drives a souped-up 1973 Ford XB Falcon, a car which was manufactured almost exclusively by Ford Australia.

In Mad Max 2, fuel has become one of the most valuable commodities, and characters kill each other to keep their vehicles on the road. One of the movie’s plots revolves around the transport of fuel in a fuel tanker.

In Mad Max Beyond Thunderdome, the car chases are relegated to the final scenes of the film and involve a stolen power generator, revealing the franchise’s focus on the procurement and protection of fuel sources.

The success of Mad Max and its impact on popular popular culture occurred during moments when petroculture is threatened. The first three films were released hot on the heels of the 1970s energy crisis, at a time when American car chase films also reached their apex.

During a time when Americans experienced fuel shortages and hikes in gas prices, car chase films provided the opportunity to hit the open road. However, there was also outrage as American truckers went on strikes, chanting, “More gas! More gas!”

Furiosa, a prequel to the franchise starring Anya Taylor-Joy as young Furiosa, is set to be released in 2024.

It is interesting that after nine years, the franchise is being resurrected. What is it about today that calls for a revival? Is it a nostalgia for the open road without borders and mandates? Is it the possibility that due to petroculture, climate change becomes more difficult to address? After all, the post-apocalyptic world of Mad Max is a climate crisis nightmare.

The Mad Max franchise is an extension of our anxieties surrounding our reliance on fossil fuels. This is also reflected in petroculture’s support of the ‘freedom convoy’ and its ability to disrupt our lives. What fuels the occupation is quite literally, fuel.