Key markets for Canadian exporters according to EDC’s experts

Export Development Canada broadcasted a virtual discussion from Ottawa to share expertise and opportunities for Canadians in the Indian, Chinese and US markets. 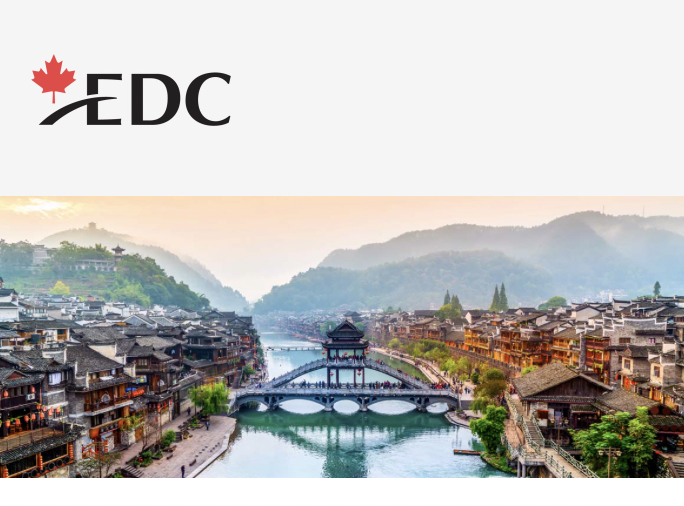 3 Promising Export Markets for Canadians according to EDC

Export Development Canada hosted a live virtual discussion with Senior Economist Meena Aier who led speakers through a series of questions meant to uncover key business opportunities for Canadian exporters looking to establish their interests in the United States, India or China.

According to Aier, the EDC’s modelling shows that Canada’s exports to the United States are still not reaching their full potential even though 75 per cent of them head to the U.S. each year.

As far as digital and technology are concerned, Gonsalves said there are incubators of opportunity in Atlanta, and in particular, a research triangle in North Carolina connecting Duke University, MC State University and the University of North Carolina focusing their research on cleantech, agricultural tech and life sciences which could serve as “landing pads” for Canadian firms. He added that in these times, many U.S. firms could benefit from the expertise Canadian firms can offer in the cleantech and agri-tech areas.

“The beauty of digital and technology is its stands multiple sectors where companies can prove value and gain revenue and market share by applying this technology in different ways. Canada has a good subset of skilled technology firms and new ventures that are coming out of there,” said Gonsalves.

“To illustrate India’s diversity, a quick test would be to take any India Rupee bank note on which you will see 50 different scripts of local languages,” said Papara.

“So the takeaway here is that India is home to many languages and cultures. For this reason, a regional approach to exporting is recommended.”

He added that several components should make business in India easier for Canadian exporters. To begin with,  English is the language of business in India. Also, the goods and services tax is a common structure across Indian states. India’s financial system has clear rules set out by the Reserve Bank of India. Finally, payments via mobile phone are fast becoming the norm.

According to Papara, Canadian exporters can find opportunities in the automotive sector, food processing, retail and e-commerce, oil, gas, renewable energy and manufacturing.

Papara noted that manufacturing carries with it a special opportunity in India due to the $3 million US fund put together by the government of India in 2020 for production link incentives. These incentives are also available for foreign companies looking to manufacture in India; in fact, the incentives cover 13 sectors including electronics manufacturing, telecom and network products, food products and solar panels among others.

When Canadian companies market their products to India, they must keep in mind that India does not need simple manufactured goods, This is one area where Canada cannot compete on price, according to Papara.

Negotiations in India require a high level of patience as it may take weeks or months for contracts to be finalized. Typically, the contract’s price and payment terms hold up conclusion of the contact.

Government contracts are awarded through the lowest bidder system which means that even if a company has the superior product, they may still lose out on price.

Additionally, Papara mentioned that India’s arbitration system can be detrimental to Canadian companies; specifically, contract enforceability may present challenges due to language barriers. He recommended the seat of arbitration be held in Singapore, London or Canada.

Liew Chia Wan, Chief Representative of Greater China at EDC said Canada’s exports to China in 2021 surpassed the record of $20 billion set in the previous year.

“China continues to play the role of factory of the world. The market reacts and changes very quickly. What is quickly sought after today could very easily become obsolete or abandoned as industries embrace new technology and consumer tastes change,” said Wan.

For decades, Canadian food exports have been and continue to be the country’s main exports to China in the form of grain, meat, seafood and frozen foods.

According to Wan, China remains the largest market in the world for total consumer spending. Wan said rising income and a growing middle class will continue to drive consumer spending in all product categories.

“Chinese consumers are willing to pay a premium for high quality products. Canada is a country well-known for quality, so this is very well recognized in China,” said Wan.

China’s automotive market presents opportunities for Canadian exporters as automotive companies in the country constantly seek the coolest, latest and most advanced technology to go into their vehicles, according to Wan. This market also extends to opportunities in aerospace and other transportation equipment.

Additionally, 10 per cent of new automotive production will be electric vehicles. Wan said Canada, particularly the automotive cluster in the Greater Toronto Area and Hamilton, has a lot of depth in the automotive supply chain as it can supply automated driving solutions, security, electrification, light reading and smart technologies.

According to Wan, China is also investing heavily in green, renewable energy solutions to help meet its goal to be carbon neutral by 2060. At the same time, China is also trying to address environmental problems such as contaminated soil, polluted water sources  and air pollution.

“This is a massive market for clean technology and environmental remediation solutions,” said Wan.

Canadian businesses can find other opportunities in the pulp and paper sector, chemicals used in paper production, mineral oils and gas.

Finally, Wan noted that China’s market is not for enterprises of all sizes as the gestation period for market readiness tends to be quite long. Firms looking to establish themselves in the Chinese market must be prepared for visibility studies, building relationships, sorting out the local distribution network, logistics, production, product optimization — all of which require a considerable amount of resources.