Receiving images from the public data broadcast of NOAA satellites is something anyone can learn how to do. 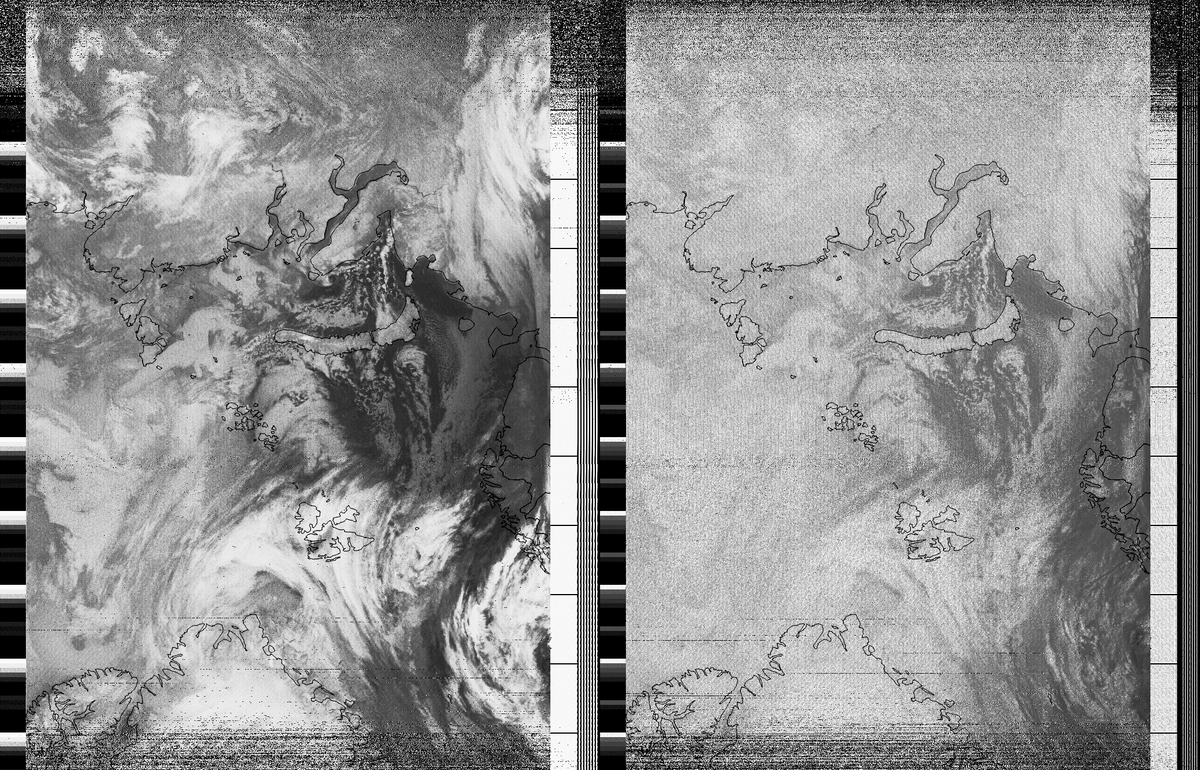 The Arctic Circle – a region at the fore of Earth’s changing climate. Barfrost, Author provided

Documentaries about the climate crisis are often illustrated with spectacular satellite images of forest fires, hurricanes and flooded landscapes. People around the world weather these conditions with little control over how their experiences are recorded and represented. Our project, open-weather, offers the tools and knowledge to change that.

On the first day of COP26 (the latest UN climate change conference in Glasgow) our network of 29 volunteers captured a collective image of Earth by tuning into transmissions from three orbiting National Oceanic and Atmospheric Administration (NOAA) satellites. We did this using DIY satellite ground stations made up of radio antennae plugged into laptops.

Each member of the group recorded a satellite image as well as what they could feel and observe of the weather on the ground. Across 14 countries and six continents, the network recorded a total of 38 images which, when stitched together onto a map, produced a snapshot of the planet on October 31 2021.

This snapshot included a cyclonic weather system curling around the UK, dust clouds sweeping the Indian subcontinent, and the glaciers of the Patagonian Andes, which have been shown by geographer Bethan Davies to be rapidly receding and thinning in response to global warming.

How to take your own satellite images

Receiving images from the public data broadcast of NOAA satellites is something anyone can learn how to do. All you need is a basic V-shaped antenna, a device called a dongle, and one of many free software programmes, like CubicSDR. The antenna and dongle together cost around £50 (US$66).

Now you’re ready to launch your DIY satellite ground station. First, use a free online tool to track satellite orbits overhead, then find somewhere outdoors with a clear view of the sky. Connect the antenna to your laptop using the dongle and tune it to a specific frequency using the software. Position the antenna so that the tip of the V points north, and the arms of the V are parallel to the ground as a NOAA satellite passes overhead.

Your antenna captures the satellite’s unique radio transmission and sends it to your laptop, where the software transforms the signal into a sound. The sound can be decoded into two images received by the satellite as it passed over you. The first is composed of mostly visible light reflecting off the surface of the Earth, the second is made of infrared radiation – invisible electromagnetic waves emitted by the land, sea and clouds. The way you position your antenna and even your body are recorded in the image as signal and noise. This means each image is unique to the person and place that created it.

Open-weather was founded in April 2020 out of a desire to open up this practice to non-specialists. We published a series of how-to guides and hosted workshops in different countries. We also created artworks in collaboration with design studio Rectangle, and commissioned by The Photographers’ Gallery in London. As a result, a network of amateur satellite image decoders has begun to form around the world.

Here’s what they captured while world leaders were gathered in Glasgow for COP26.

The climate crisis in a snapshot

For their part in the project, cartographer and marine technician Joaquín Ezcurra and journalist Aimée Juhazs travelled to Parque Nacional Ciervo de los Pantanos in Argentina – a wetland at risk from climate change.

It was “a day of unexpected low temperatures” after the arrival of the cold sudestada wind, Ezcurra and Juhazs wrote in their field notes. They added that “communities living in the delta of the Paraná River in Argentina are suffering dearly from both low levels of water, and increasing numbers of fires during the winter dry season”.

Ankit Sharma, a mechanical engineering student in Mumbai, India, submitted a trio of images covering the vast region from the Persian Gulf to the Himalayas. During the second satellite pass, he noted: “My laptop had a layer of dust on it … heavy pollution was felt”.

“The pattern of cloud [reflects] the beauty of the nature”, wrote radio amateur Yoshi Matsuoka in Atsugi Kanagawa, Japan.

He noted, too, that the region had had “extreme torrential rain”. Many contributors wrote about their experiences of exceptional rainfall.

“Weather systems are getting tougher and tougher to predict”, and so too is knowing “what to plant, where to plant, and when to plant”, wrote Natasha Honey, a farmer in New South Wales, Australia.

In Glasgow, not far from the COP26 conference venue, artist and curator Alison Scott commented: “Climate change is felt … in a lack of public transport resilience; in bike lanes being opened (and closed) … in the corporate hijacking of COP26 and the city’s unpreparedness for its scale; in the erosion of rogue-landlord-ed sandstone tenement buildings in need of retro-fitting. It is felt in the history of the place.”

“The sun dominates”, wrote artist Cédrick Tshimbalanga in Kinshasa, Democratic Republic of Congo. Before, “the rainy season was alive and rain was abundant, and during the dry season, it was much colder”.

Zack Wettstein, a doctor in Seattle, Washington, received a satellite transmission during a “cold, dry, autumn morning, with no wind in sight … in stark contrast to the weather of the past week, when we were struck with an atmospheric river of rain from a bomb cyclone off the Pacific”.

He added: “As a physician working in the emergency department, I see patients affected by these hazards wrought by climate change … with injuries, illness and exacerbations of their underlying disease”.

We received a surprise contribution from Barfrost in Kirkenes, Norway, who imaged the cartographic North Pole and noted that “southern insects [are surviving] the winter”.

These satellite images and field notes demonstrate that the climate crisis feels different depending on who you are and where you live. In some places, dry seasons are expanding. Elsewhere, it’s clouds of dust, increasingly volatile storms, or health effects triggered by the air that we breathe.

As politicians fail to respond to the climate emergency, a growing community of Earth-watchers has practical and political potential. Together, we might learn to be collectively responsible for, and accountable to, the environments we are changing.