Sentinel-5P, launched Oct. 13, can map levels of nitrogen dioxide, methane, carbon monoxide and other pollutants that can be hazardous to human health or contribute to global warming.

December 1, 2017  by The Associated Press, with files from Canadian Manufacturing.com 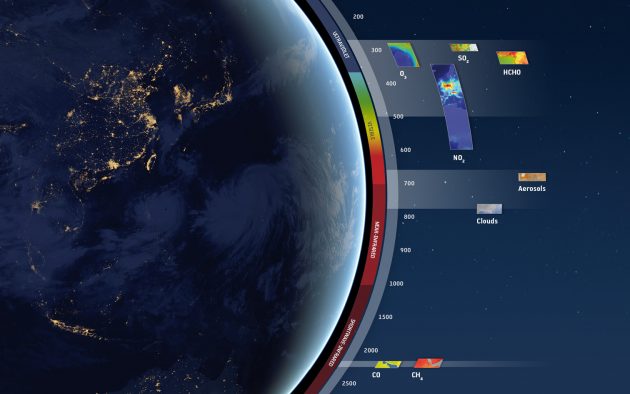 Tropomi, the most advanced multispectral imaging spectrometer to date, was developed jointly by ESA and the Netherlands Space Office. PHOTO: European Space Agency

BERLIN—Images taken by a new European satellite show the levels and distribution of air pollutants around the world, including ash spewing from a volcano in Indonesia.

The European Space Agency released images Friday made by its Sentinel-5P satellite that show high concentrations of nitrogen dioxide in parts of Europe on Nov. 22.

The images were captured by the Tropomi spectrometer, which measures in the ultraviolet and visible (270–500 nm), near-infrared (675–775 nm) and shortwave infrared (2305–2385 nm) spectral bands. This means that a wide range of pollutants such as nitrogen dioxide, ozone, formaldehyde, sulphur dioxide, methane and carbon monoxide can be imaged more accurately than ever before.

The spectrometer observes sunlight that is scattered back to space by Earth’s surface and atmosphere, detecting the unique fingerprints of gases in different parts of the spectrum.

Nitrogen dioxide is mainly caused by vehicle emissions and in industrial processes.

A series of images also show sulfur dioxide, ash and smoke from the Mount Agung volcano in Bali last month.

Sentinel-5P, launched Oct. 13, can map levels of nitrogen dioxide, methane, carbon monoxide and other pollutants that can be hazardous to human health or contribute to global warming.