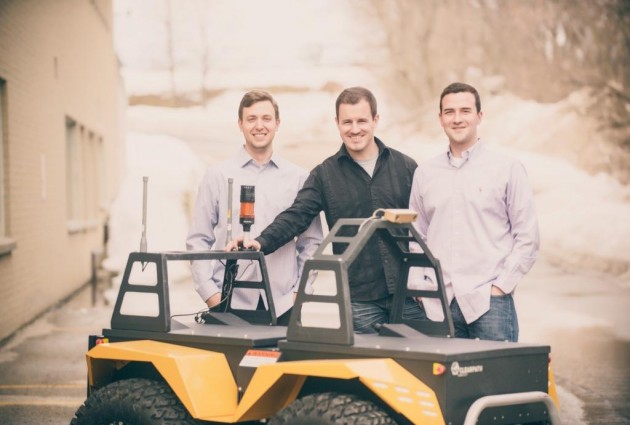 WATERLOO—Workers at industrial centres, toiling away at dull, repetitive and often dangerous jobs, have reason to be worried.

“[It’s told] take this payload and move it here, and it’s able to do that over and over and over again,” Simon Drexler, director of Indoor Industrial Systems at Clearpath, said.

“It never takes a break, and it can navigate itself from any random origin to any random destination inside of a building,” he added.

The Silverback has a 1,500 kilogram payload capacity – markedly more than its namesake – and is primarily designed to autonomously move pallets around manufacturing plants. It functions without an operator, receiving and carrying out orders relayed by a warehouse control system or enterprise resource planner.

Although ClearPath predicts its robots will work alongside humans as opposed to replace them, the company does think the industrial sector is about to undergo yet another technological transformation. The Silverback is just the next step in the company’s goal of automating some of the world’s dullest, dirtiest and deadliest jobs.

“Throughout history, people have turned to technology to improve our quality of life,” Matt Rendall, Clearpath CEO and co-founder said in a statement. “We believe in using service robots to make the world a better place.”

Bolstered by $14-million in funding from RRE Ventures and iNovia Capital that was doled out in the fall of last year, the company has quickly expanded from its core research and development business into the industrial sector. The Silverback, which is currently in limited release, has a zero turn radius, a top speed of 4.47 miles per hour and packs quite a lot of punch for its size. The new bot measures 1.7 metres by 1.1 metres, and stands just 0.35 metres – or slightly more than a foot – off the ground. Although Drexler could not disclose any specific sales, he said the company has attracted the interest of several major American manufacturers.

With its impending foray into the industrial market, ClearPath has made tremendous progress since Rendall and three other mechatronics graduates from the University of Waterloo founded the company in 2009.

ClearPath’s original business plan was to provide robots with generic programming to academics. This would allow professors to further their software research without getting bogged down designing basic hardware. After building a strong following and putting black and yellow robots in research labs around the world, the company entered into co-development projects with industry players and began building bots for a range of different applications, including surveillance in areas it’s dangerous or cost-inhibitive to send humans.

The company registered a profit after only 18 months in business and has been expanding ever since. Among its automated vehicles already on the market are the land-based Grizzly, the seafaring Kingfisher and an unmanned aerial vehicle known as the Hummingbird. The company has over 500 customers in 40 countries and hopes to build on that substantially with the full release of the Silverback this September.

One thing is certain, ClearPath will have a large market to grow into.

Growth prospects take off from there. A 2013 McKinsey & Co. report estimated the potential global economic impact of the advanced robotics industry would reach anywhere from US$1.7 to $4.5 trillion by 2025.

“The sky’s the limit for this industry,” Drexler said. “We firmly believe here at ClearPath that we’re right on the cusp of mass adoption of autonomy in the industrial space… and in many spaces around the world.”

Amid plans to finalize the Silverback’s release, Clearpath is also looking ahead to its next venture in which it will look to automate even more factory and warehouse machinery.

“In order to tackle the problem of autonomously transporting material you need a variety of form factors because there’s a variety of payloads,” Drexler said.

Simply put, goods are not always neatly arranged on pallets. To account for this, traditional companies in the industrial space employ a variety of vehicles capable of taking on different payloads.

ClearPath wants to automate them all.

“What we’re after is creating an ecosystem of driverless vehicles that are all operating under one centralized control system,” Drexler said. “Taking that brain and putting it on a fork truck or a tugger or an [automated guided vehicle] or our robots, or anything in between.”

Ultimately, ClearPath wants to build a fleet of automated vehicles controlled by a warehouse control systems or over the Internet of Things.

Despite its lofty goals, the company is taking a practical approach to the robotic revolution.

“It’s sometimes difficult for people to take a leap from whatever they’re doing right now to fully-autonomous operation,” Drexler said. “And we’re very happy to help our partners walk before they run, and take a single step toward full automation, and then a second step, and a third step, and as many steps as it needs to be until they’re full automated.”