Fruit & Vegetable: Bringing the Crazee Mite to the Canadian market

Channeling a native mite’s cannibalistic tendencies towards pest control is having delicious results. 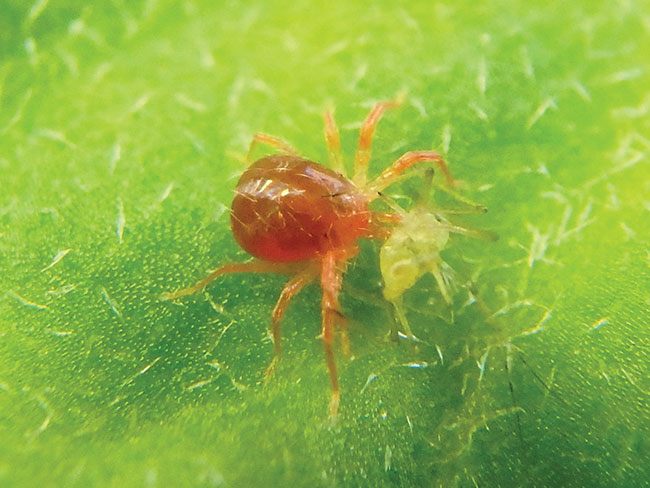 The success of Anystis is already evident among Canadian growers who were eager to be involved with trials over the past year. Photo courtesy of Taro Saito.

Commercializing any new biocontrol agent is not easy, especially when it’s a cannibalistic, predatory mite that likes to eat everything in its path. However, the researchers at Vineland Research and Innovation Centre (Vineland), along with their commercial partners at Applied Bio-nomics Ltd., decided to take on the challenge with Anystis baccarum – and now they’re seeing a load of potential for the Canadian market.

The inspiration for researching Anystis started when Taro Saito, senior research technician in biological control at Vineland, was playing in the backyard with his toddler in 2012. After his son found an Anystis mite catching a fly, he decided to bring some of the mites to work to see what research had been done on them. “I got really excited and [had to look into] what species this is,” Saito says.

Since Anystis is a naturally occurring species in Canada, Saito discovered that researchers had previously looked into the possibility of using it as a biocontrol agent in the 1960s. However, the mite’s cannibalistic tendencies proved to be a challenge for creating a cost-effective, mass-rearing system.