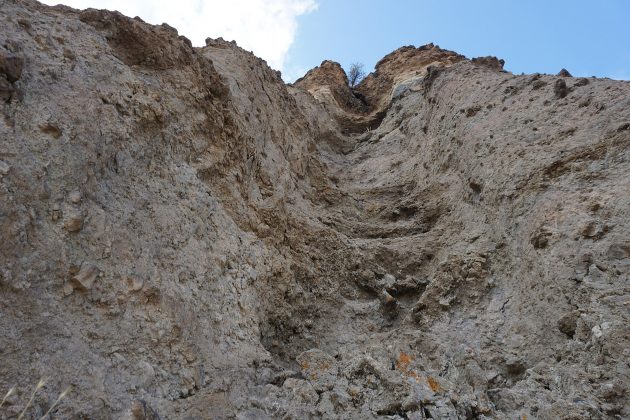 The origin of continental crust is debated in part because the further back in time you go, the fewer rocks there are to study. PHOTO: Wikimedia Commons

The rocks at the surface of the modern Earth are broadly divided into two types: felsic and mafic. Felsic rocks are generally relatively low density — for a rock — and light in colour because they are made from whitish minerals rich in silicon and aluminium. Half Dome in California is made of granite that is a felsic rock. Mafic rocks, in contrast, are relatively high in density and dark in colour because they contain minerals rich in iron and magnesium; Giants Causeway in Northern Ireland is made of basalt, which is a mafic rock.

The difference in density between felsic and mafic rocks means that felsic rocks are more buoyant, and therefore sit at higher elevations above the Earth’s mantle (the layer inside the Earth between the crust and the core). For this reason, felsic rocks make up Earth’s continents whereas the lower elevation crust under the oceans is mafic.

The mechanisms that separated the rocks at Earth’s surface into these two groups may have also created the environment needed for life to flourish 4.3 billion years ago, very early in the history of Earth.

The separation into these two rock types is the result of plate tectonics: where the tectonic plates separate and move apart, the rocks below become depressurized, melt and fill in the gap between them, like the Mid-Atlantic Ridge. The rock that fills the gap between the plates is mafic.

When one plate slides below another, fluids released from the lower plate cause melting in the mantle. These melts have to pass through the upper plate to reach the surface. On their way to the surface, they undergo a series of processes called fractional crystalization, which can change mafic melts into felsic melts.

When this separation happened is a matter of great debate in the Earth sciences because it may allow us to determine when the Earth became habitable for life. Many Earth scientists believe that the weathering of continental crust may have provided the nutrients for life to thrive; identifying when the first continents formed indicates when this may have occurred.

The exact mechanism is important for understanding the history and evolution of Earth, and may help understand the processes that could be occurring on other planets.

Our recent study looked at the oldest geological material on Earth. The results suggest that Earth was already separating into these two rock types by 4.3 billion years ago — effectively since the beginning of the Earth’s geological record. Our data also gave intriguing insights into the tectonic processes that may have been occurring at that time.

The origin of continental crust is debated in part because the further back in time you go, the fewer rocks there are to study. Samples from the Acasta Gneiss Complex in northern Canada were found to be about four billion years old — the oldest known rocks on Earth. These Acasta Gneiss rocks are felsic and composed of tonalite-trondhjemite-granodiorite.

There are very few older samples from Earth, the most famous of which is the Jack Hills zircons. These are up to 4.3 billion years old, 300 million years older than the Acasta Gneiss. They are tiny grains of mineral zircon that have been eroded out of their parental rock (the rock in which they initially crystallized).

These zircons are found in much younger sediments in Australia, which means that it’s difficult to determine what kind of rocks these minerals originally came from, leaving open the question of whether there was continental crust during the earliest period of Earth’s history.

In our recent study, we compared all aspects of the chemistry of the zircon crystals from Acasta rocks to the Jack Hills zircons to see if they could have been formed in a similar environment.

We found that the two sets of zircon grains are chemically identical, suggesting that they formed from the same kinds of rocks and likely in the same kinds of tectonic settings. This means that the Earth may have started to create continental-type crust very soon after it formed.

The chemical composition of both suites of zircon crystals also suggest that they grew in magmas that originated at great depth in the Earth. Deep origins for magmas are a typical sign of subduction on the modern Earth.

We compared the amount of uranium in the crystals to the amount of ytterbium, a rare element. When a magma forms at great depth, the mineral garnet is often present, which gathers ytterbium. This means less ytterbium is taken up by zircon crystals, suggesting that a relative lack of ytterbium indicates that these magmas formed in deep environments.

Ultimately, our results indicate that the tectonic processes occurring at the beginning of the geological record may not have been so different from the processes occurring afterwards. Evidence that things were not too different to modern Earth brings intriguing insights into the potential for the origin of life and the habitability of the early Earth, possibly confirming that life was present very early in Earth’s history.

This is a corrected version of a story originally published on June 17, 2020. The earlier story said 4.3 million years ago instead of 4.3 billion years ago.