COP26: How the world will measure progress on the Paris climate agreement and keep countries accountable 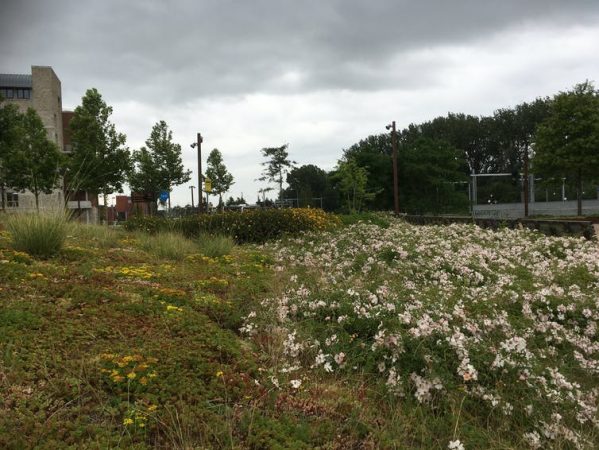 Green roofs, like this one in the Netherlands, can reduce heat transfer through the building roof, improving comfort inside and reducing heat stress from heat waves. (Shutterstock)

Climate change is a global problem that knows no national borders. All countries will have to work together and take bold actions to reduce greenhouse gas emissions and demonstrate that their emissions are declining if we are to meet the Paris Agreement goal of keeping the global temperature rise to no more than 1.5 C above pre-industrial levels.

To achieve any goal, targets must be set and progress measured. When it comes to climate change, that assessment is called the “global stocktake.” The stocktake, which will occur every five years beginning in 2023, takes a look at the collective progress the world’s nations have made on climate action.

Several reports have found that countries’ climate pledges (called nationally determined contributions, or NDCs) aren’t ambitious enough to meet the goals of the Paris Agreement. Even if current pledges are achieved, there are few ways to further reduce emissions after 2030 quickly enough to limit global warming to 1.5 C. The expert reviewers for the reports published by the Intergovernmental Panel on Climate Change say strong, rapid and sustained emissions reductions would limit global warming and prevent the worst climate impacts.

When country representatives gather at the United Nations climate conference (COP26) in Glasgow, Scotland, in November 2021, they will finalize the plans for the global stocktake — how the parties to the agreement will measure and report their climate actions — so they can then strengthen their own country’s climate pledges.

Where are we at?

Article 14 of the Paris Agreement offers some information about what the global stocktake might look like, but falls short in naming specific accountability and reporting mechanisms.

That’s a bit like working together on a community garden to grow healthy food without those involved agreeing upon some clear ground rules, such as how plots are assigned, which crops are appropriate and how to make the garden thrive.

The 191 parties (190 countries plus the European Union) aren’t without some guidance, however. At the COP24 meeting in Katowice, Poland, in 2019, they agreed on a three-phase process for the stocktake.

This process does not specify what data are needed and in what format. The absence of a harmonized approach to data collection, and the fragmented evidence that comes with that, will constrain our ability to measure progress.

How are we doing?

Some countries, such as Germany and Canada, are already producing progress reports on climate action. But it is unlikely all these reports will be in a format that allows them to be compared, which is important for aggregating findings and answering the question: How are we collectively doing?

Establishing reporting mechanisms is nothing new. Guidelines exist to help governments structure their nationally determined contributions, which feed into the NDC Synthesis, a report that provides an overview of national climate ambitions. Similar guidelines for reporting on national climate actions are essential to support the global stocktake.

For efforts to reduce emissions, also called mitigation, one way of determining success is by measuring the size of the emission reductions. But it’s unclear if a comparable method exists to measure efforts to respond to and manage actual or expected climate and its effects, called adaptation.

The global goal on adaptation, such as enhancing the capacity to adapt, strengthening resilience and reducing vulnerability to climate change, is vague, leading to challenges in measuring its success.

When governments make decisions about addressing climate change, they often overlook how they will measure climate progress. In his 2021 executive order on tackling the climate crisis, U.S. President Joe Biden noted that agencies will develop “climate action plans and data and information products to improve adaptation” without elaborating on how those plans will be evaluated.

UN agencies often conduct evaluations to measure outcomes of their programs. We recently reviewed UN evaluation reports published from 2014 to 2019 to assess how climate change was accounted for in programs intended to bolster food security — the availability of food and access to it. Climate change — including increasing temperatures, changing rainfall patterns and a greater risk of extreme weather — has strong negative effects on crop yields and livestock health.

Our review provided insights into how food security programs are managed and how the results are measured in the context of climate change. We identified three things countries can do now to prepare for the stocktake.

Governments must provide dedicated resources for climate action. Doing so will not only support its measurement but also improve the response of programs to climate change.

Reliable data play a critical role in the global climate response. At the upcoming COP26 meeting in Glasgow, countries will decide how to collectively evaluate their climate action. These decisions will go a long way in ensuring consistent data collection and reporting, leading to snapshot of global progress that can unite countries in their effort toward addressing climate change.