Officials have concluded talks in Washington, leaving a "great deal" of work for September summits in Mexico and Canada. A long list of topics have already been broached, but one may be strictly off limits 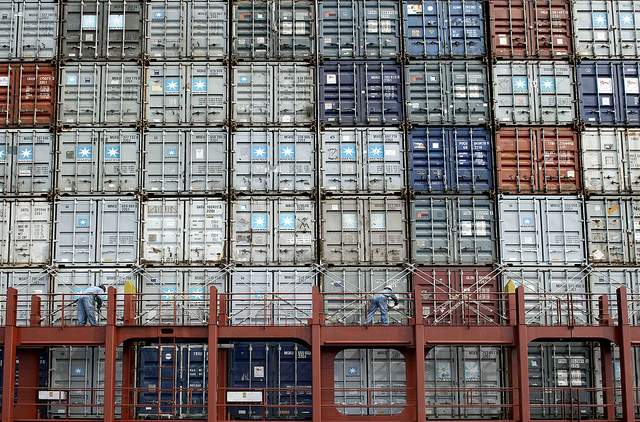 Major trade talks in Mexico and Canada will follow in September as officials leave Washington. PHOTO: Maersk Line, via Flickr

WASHINGTON—North American countries concluded their first round of negotiations toward a new continental trade agreement Aug. 20 with a statement that suggested major issues needed to be sorted out in the talks ahead.

A joint statement from the three countries couldn’t even agree what to call this process: A ”modernization,” which implies simple changes and is the preferred term of Canada and Mexico, or ”renegotiation,” the word most often used in the U.S.

The statement used both terms. In a joint communique issued as negotiators left Washington Aug. 20, Canada, Mexico and the U.S. declared: ”(We) launched the renegotiation and modernization.

There’s considerable work ahead, the countries acknowledged in their statement: ”While a great deal of effort and negotiation will be required in the coming months, Canada, Mexico and the United States are committed to an accelerated and comprehensive negotiation process.”

Veterans of trade negotiations say this is the most ambitious schedule they’ve ever seen.

The countries are aiming to wrap up a trade deal within a few months, before the Mexican election heats up next spring—because otherwise talks could drag out another year, past the U.S. congressional elections, and into 2019.

”Negotiations will continue at this rapid pace,” said the statement.

The initial round was heavy on introductory sessions and schedule-setting. But it also touched substantive issues that revealed possible irritants ahead. Among the two-dozen-plus topics discussed so far were auto-parts rules, cutting edge pharmaceuticals, and labour.

On auto parts, the U.S. surprised its allies on Day 1 by hinting it might favour a Made In America-style content quota. The statement on that from U.S. trade czar Robert Lighthizer was vague and, according to sources, was not followed up by any specific numbers being tabled by the U.S. side in the initial round.

However, the idea was swiftly opposed by Canada, Mexico and the auto industry.

On pharmaceuticals, the U.S. has also proposed a 12-year patent-style protection for cutting-edge biologics medicines, sources say. This is significantly higher than the protections in Canada and Mexico, would drive up prices, and could be an irritant if the U.S. sticks to it.

However, it’s no surprise this was the U.S. opening gambit. It was practically required under U.S. law. The domestic fast-track law that gives the White House the power to conduct trade negotiations demands that harmonizing intellectual property rules to American standards be a U.S. negotiating priority.

A report in Inside U.S. Trade said Canada has also presented demands on labour rights that would force the U.S. to sign all the International Labour Organization conventions. That’s generally been a non-starter for the U.S.

Otherwise, the first round of talks was free of public drama.

President Donald Trump didn’t even tweet about it. While forcing these three countries together for a major trade negotiation was the culmination of a key Trump campaign promise, the president didn’t say a word about it, in a week consumed by drama over race relations and a planned announcement on the next U.S. moves in Afghanistan.

The one senior U.S. official to talk about it was Vice-President Mike Pence. As usual, in his comments on trade, as on other issues, Pence sounded more like a traditional Republican than his boss’s America First-touting rhetoric.

”We seek a deal in the original spirit of NAFTA,” Pence told an event in Panama.

”Canada and Mexico agree that NAFTA has significant room for improvement to ensure a level playing field for all. And as I told Prime Minister Trudeau last month, we will work together for a win-win-win outcome.”

Of the long list of topics up for discussion, however, one that the U.S. signalled would not be on the list is changes to Trump’s “buy American, hire American” agenda.

Though the Trump administration is being pushed by Canada and Mexico to reduce Buy American rules for public-works contracts, domestic U.S. politicians are pulling the White House in the opposite direction.

The administration issued a reminder it’s working to resolve the issue outside of NAFTA just as negotiators were huddled in Washington for the opening round of talks. The U.S. government posted a notice seeking public comment on the costs and benefits of trade agreements on the operation of Buy American laws in government procurement online over the weekend.

Ohio-based trade lawyer Dan Ujczo says it’s no coincidence that the notice turned up while NAFTA negotiators for Canada and Mexico were still in the U.S. capital.

“It’s a strategy,” he said in an interview. “They want people to know that it’s coming out.”

Ujczo said he suspects the U.S.’s objective is to make procurement non-negotiable and intends to force Canada and Mexico to decide whether it’s a sufficient reason to walk away from NAFTA talks.

In his opinion, it shouldn’t be a deal-breaker.

“This isn’t something I would walk away from the NAFTA table for,” he said. “I would just adjust my strategy for focusing really on the states.”

The next round of negotiations will be held in Mexico City from Sept. 1-5. The countries will in the meantime consult domestic stakeholders and prepare to table more texts that will form the backbone of a new agreement.

A third round will be held in Canada in late September.

—With files from Joan Bryden, The Canadian Press