The U.S. Commerce department decision, which threatens more than 4,000 jobs in Northern Ireland, has been called absurd and is likely the first volley in a trade war between what was once the world's closest trade partnership 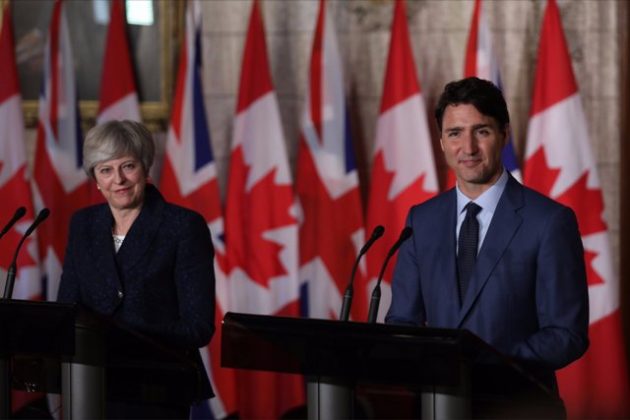 LONDON—U.K. Prime Minister Theresa May said she was “bitterly disappointed” with the U.S. government’s decision to slap duties of almost 220 per cent on Bombardier’s C series aircraft, which threatens more than 4,000 jobs in Northern Ireland.

May took to Twitter to vow she’ll work with the Montreal-based company to protect jobs. The prime minister had previously lobbied President Donald Trump after U.S. aircraft maker Boeing alleged that Bombardier used unfair government subsidies to sell planes at artificially low prices. May has a key alliance with Northern Ireland’s Democratic Unionist Party to support her minority government in Parliament.

But unions accused the prime minister of failing to protect workers. Ross Murdoch, the GMB union’s national officer, said the ruling was a “hammer blow” to Belfast, where Bombardier makes aircraft wings and fuselages.

“Theresa May has been asleep at the wheel when she could and should have been fighting to protect these workers,” Murdoch said. “It’s high time she woke up.”

The U.S. Commerce Department on Tuesday ruled in favour of Boeing, saying “the subsidization of goods by foreign governments is something that the Trump Administration takes very seriously.” The department is scheduled to issue a final ruling in the case on Dec. 12.

Boeing alleges that Bombardier received at least $3 billion in subsidies from the governments of Britain, Canada and the province of Quebec, allowing it to sell planes to U.S.-based Delta Air Lines for less than the cost of production. The Chicago-based aircraft maker asked the Commerce Department and the U.S. International Trade Commission to investigate what it called “predatory pricing.”

Delta last year agreed to buy 75 of Bombardier’s new CS100 aircraft, with an option for as many as 50 more. Bombardier valued the firm order at $5.6 billion based on the list price of the aircraft.

Delta says Boeing doesn’t even make the 100-seat planes it needs for short- to medium-range trips.

Bombardier called the decision “absurd,” and accused Boeing of trying to stifle competition.

Commerce Secretary Wilbur Ross, on a visit to Hong Kong, told reporters that part of the problem was Bombardier’s lack of co-operation with the investigation.

“It’s not out of any anti-Canadian or any anti-U.K. or certainly any anti-Northern Ireland sentiment, but even with your friends and even with your allies, you must obey the rules,” he said.

British Liberal Democrat leader Vince Cable urged May to stand up to the United States, as her Canadian counterpart Justin Trudeau has done. And the leader of the Democratic Unionist Party, Arlene Foster, said she would the use party’s influence with the government to press the issue.