The president's weekend tweet is the first time he's complained about Canada's role in the talks. As negotiators prepare to reconvene in Mexico, however, officials are increasingly shrugging off Trump's comments 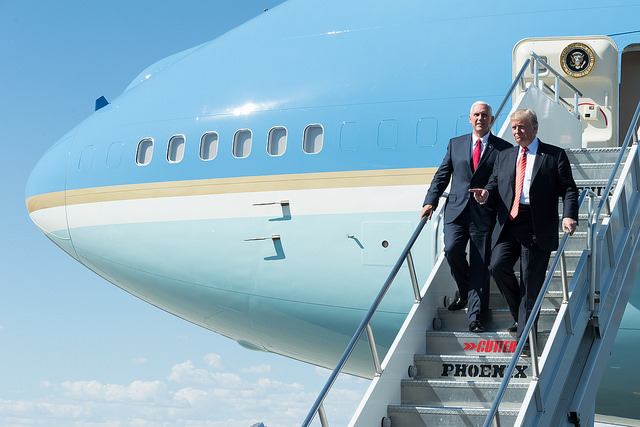 WASHINGTON—U.S. President Donald Trump again suggested the North American Free Trade Agreement be terminated, tweeting this weekend that both Canada and Mexico are being “very difficult,” but observers and political leaders didn’t appear to take the threat too seriously.

“I think what we have to recognize is that the negotiations are going forward. You will not hear me react to his daily tweets or statements. I don’t think that would be very productive,” Couillard said as he arrived in Charlottetown for the annual meeting of New England governors and eastern premiers.

Couillard says the American governors he’s meeting with are eager to modernize and improve NAFTA.

“When we talk to governors, when business people talk to each other, the feeling is quite good and quite positive. Everybody recognizes that trade is beneficial for both Canada and the U.S.A.”

Trump has already threatened earlier this year to end NAFTA. At the time Foreign Affairs Minister Chrystia Freeland’s office said “heated rhetoric” is common in trade negotiations, her officials had little to add in response to Trump’s Sunday tweet.

The Aug. 27 tweet was the first time though that Trump has complained about Canada’s role in the talks, which began earlier this month between Canada, the U.S. and Mexico.

Sui Sui, an economics professor at Ryerson University’s Ted Rogers School of Management, said she doesn’t take Trump’s comments too seriously either, because these kind of talks “should be hard.”

“This is a pretty normal trade negotiation: each party fights (for) the best interests of their own country,” she said. “The Canadian government is just doing their job, same as the Mexican government.”

Robert Holleyman, former deputy trade czar under Barack Obama, also doesn’t expect Trump to follow through with his threat to withdraw the U.S. from the trade deal. In a Twitter post on Sunday morning, Holleyman cited agricultural interests and dissent from Congress as barriers to the president’s plan.

“Mark my words. He will not pull out of NAFTA,” he wrote.

Trade economist Dan Trefler, professor at the University of Toronto and senior research fellow at the Canadian Institute for Advanced Research, agrees that Trump’s Twitter rhetoric is unlikely to translate to action. For one thing, the president is unlikely to receive the congressional approval he would need to act on a major trade agreement. “Congress has been more involved in these trade negotiations than it’s ever been involved in any previous trade negotiation,” Trefler says.

And while withdrawing from NAFTA would appeal to parts of Trump’s base—people who work in manufacturing jobs in states like Michigan and Wisconsin, for instance—Trefler says it would alienate Trump’s many supporters in the farm belt.

Echoing Couillard, Trefler said that focusing on Trump’s inflammatory Twitter posts can detract from the things his administration is doing. “It’s easy for him to make these kinds of statements, because they play to the image,” he says.

“Trump has only one audience, and that’s the electorate.”


Related Stories
Trump suggests Canada has been sidelined from latest NAFTA negotiations
Canada seeks intensive NAFTA talks, even if Trump’s in no rush to sign
Trump threat hovers over NAFTA as Ottawa talks end with no major progress
Trump’s NAFTA point man warns he won’t be ‘pushed around’ in trade talks