Trump suggests Canada has been sidelined from latest NAFTA negotiations 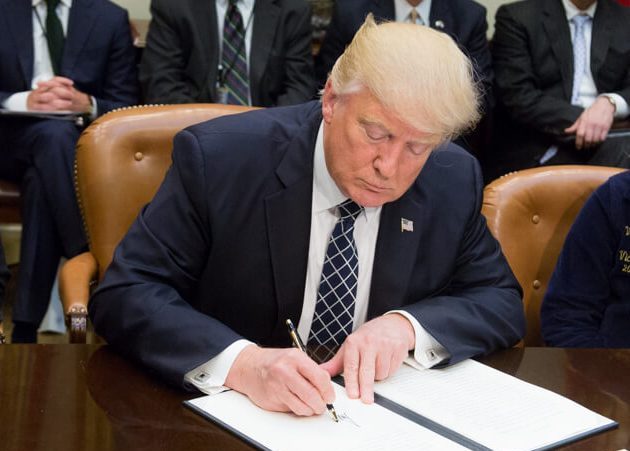 “We’re not negotiating with Canada right now,” said Trump. “Their tariffs are too high, their barriers are too strong, so we’re not even talking to them right now.” PHOTO: Shealah Craighead/The White House

OTTAWA—U.S. President Donald Trump is suggesting Canada has deliberately been left on NAFTA’s sidelines as one-on-one talks heat up between Washington and Mexico.

Canadian officials have insisted they’re unfazed by being left out of the discussions because it’s allowing the U.S. and Mexico to sort out tough bilateral issues, such as their differences on autos. They’ve stressed that there have been a lot of one-on-one talks during NAFTA’s renegotiation process.

But some observers have refused to buy that argument. They’ve said Ottawa’s partners have frozen it out of the critical NAFTA negotiations as a tactic and have warned that Canada could eventually be forced into accepting a deal reached between the U.S. and Mexico.

Trump appeared to feed that belief during a televised cabinet meeting in Washington on Thursday—on the one-year anniversary of the start of NAFTA’s renegotiation.

“Their tariffs are too high, their barriers are too strong, so we’re not even talking to them right now. But we’ll see how that works out. It will only work out to our favour.”

During the cabinet meeting, Lighthizer told the room he’s hoping for a NAFTA breakthrough with Mexico in the coming days.

“I’m hopeful with Mexico and then I hope once we get one with Mexico that Canada will come along,” Lighthizer said.

The U.S. and Mexican governments have both expressed optimism the entire NAFTA renegotiation could be concluded before the end of the month.

Related: NAFTA in August? Canada’s U.S. envoy says ‘aspirational,’ but will work for it

But Trump insisted Thursday that he’s in “no rush” to make a deal.

“If you don’t have a breakthrough, as you call it, don’t do the deal because it’s a lousy situation for the United States,” he told Lighthizer.

“We have much better alternatives than that, you understand? So, if you can’t make the right deal, don’t make it.”

Trump added that NAFTA has “been a disaster for our country.”

“Minister Freeland, Ambassador (David) MacNaughton and the Canadian negotiating team are in regular contact with their counterparts and we look forward to continuing these important discussions in the coming weeks,” Adam Austen wrote in an email.

“Our focus remains defending Canadian interests as we work towards a modernized, updated NAFTA agreement.”