The prime minister said he will look for common ground on NAFTA with the U.S. president, who has repeatedly signalled he'd rather rip up the deal than renegotiate it 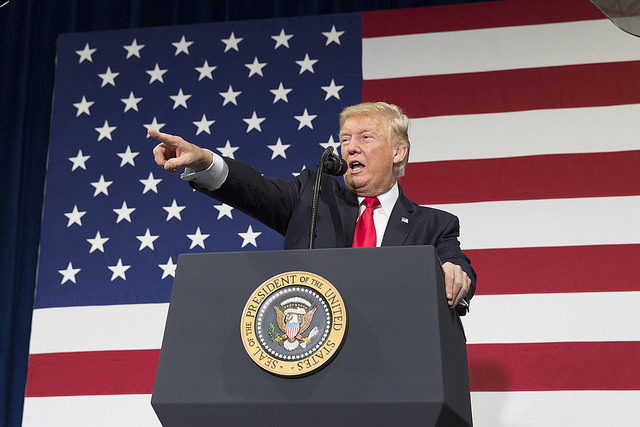 Trump is facing crises on a number of fronts, including trade, North Korea and widening divisions within his own party. PHOTO: Joyce N. Boghosian/The White House

WASHINGTON—Prime Minister Justin Trudeau will sit down with U.S. President Donald Trump today to seek common ground as uncertainty looms over the future of NAFTA.

Trudeau and Trump are to meet at the White House as round four of talks to revamp the North American Free Trade Agreement get underway a few kilometres away in Arlington, V.A.

But Trump has repeatedly signalled he’d rather rip up the deal before renegotiating it, casting a pall over the talks.

Trudeau told a summit for businesswomen in D.C. Tuesday night that he views his meeting with the president as a continuation of their efforts to find ways to mutually benefit both countries.

“President Trump got elected on many of the same goals I got elected on of making sure that people who don’t feel like the success and growth of the economy has worked for them do better,” he said.

“We don’t always have the same policy prescriptions to do that but in our desire to help the middle class and those working hard to join it we always find common ground.”

Trudeau will head into his meeting with Trump after talks with the influential House of Representatives’ Ways and Means committee, one of two bodies of U.S. lawmakers helping negotiators put forward the U.S. positions on trade.

Talks kick off Wednesday with a discussion of government procurement, already a thorny subject as U.S. negotiators suggested during the last round of talks in Ottawa they want to limit access to Canadians and Mexicans to U.S. projects.

After that, discussions will move onto developing remedies for trade disputes and on Saturday, the discussions are expected to turn to agriculture.

Trudeau said he sees room for modernizing the deal, but also to make it more progressive.

“Putting progressive elements into trade deals—labour protections, environmental protections—actually helps us make the case for trade and reassure people that the benefits of trade will be distributed more fairly and not just to the small number of people who’ve always benefited from it in the past.”

That Trudeau is in D.C. as NAFTA talks resume was something of a coincidence; the trip was originally planned in connection with the summit he attended Tuesday evening.

Prior to delving into trade issues Wednesday, he’s also meeting with an organization that promotes women’s education.

On Thursday, he’ll leave for Mexico, his first official visit to that country.

Related Stories
Trump, Trudeau had closed-door argument over trade deficits
With Canada’s anxiety running high, Trudeau and Trump to meet in the Oval Office
Trump and the G7: Stakes to stay high for Trudeau Liberals during key stretch
Trudeau to sit down with Vice-President Pence amid fresh White House intrigue