by Ruth Davenport and Rob Roberts, The Canadian Press  May 2, 2016 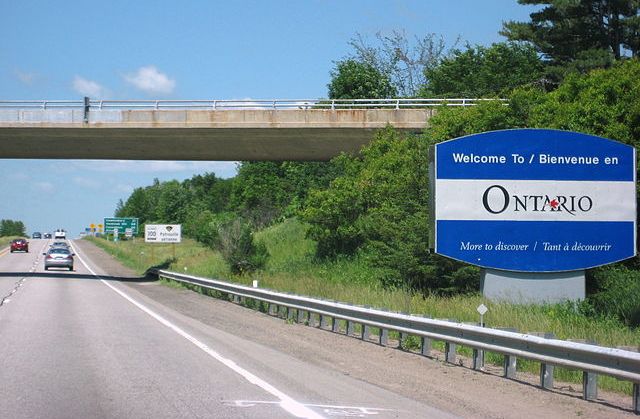 An April 29 ruling could have significant implications for inter-provincial trade barriers, which have persisted even as global agreements have made international trade easier than ever. PHOTO: Bobby H., via Wikimedia Commons

Arnold Schwisberg, who was part of the defence team, said the ruling could have the power to shift a host of laws across the country governing everything from selling chickens to how engineers and other professionals work across provincial lines.

“This is a groundbreaking decision, its ramifications are extensive,” said Schwisberg, who called it the first ruling of its kind in Canada.

In an 88-page decision, Judge Ronald LeBlanc threw out all charges against Gerard Comeau, 62, for importing 14 cases of beer and three bottles of liquor from a Quebec border town.

The judge cited the words of Canada’s founders, saying they never intended that laws should blatantly block the free flow of goods within the new country.

“I find that the speeches and orations from the Fathers of Confederation prior to the enactment of the British North America Act, 1867, conclusively point to their desire to implement free trade as opposed to the elimination of customs duties as between the provinces,” he wrote.

Schwisberg said the decision brought tears to his eyes. He expects the provincial court decision will eventually make its way through appeal to the Supreme Court of Canada.

He gamed out the implications of a top court ruling in Comeau’s favour, saying it could effectively throw out Canada’s marketing board system, allowing for the free trade of chicken, eggs, and milk, predicting food prices would likely come down as a result.

“All of that is going to change, and I argue for the benefit of Canadian consumers,” said Schwisberg, who was brought into the case by the Canadian Constitution Foundation, which supported Comeau’s challenge.

A Supreme Court ruling could also have the effect of doing away with licensing standards that prevent engineers and other professions from moving easily between provinces, he said.

Comeau was one of four people charged after a police “sting” operation in 2012.

The New Brunswick Liquor Control Act prohibits anyone in the province from having more than 12 pints of beer that wasn’t purchased through a liquor store in the province.

That was the law RCMP were using when they seized Comeau’s liquor and fined him $292.50 for bringing the liquor home to Tracadie, N.B.

“Essentially, Judge LeBlanc’s decision confirms that what tens of thousands, potentially hundreds of thousands of New Brunswickers have been doing for the past 40 years is not a crime,” he said in a telephone interview.

On Friday, Comeau said the case wasn’t just about dodging a fine.

“The way I look at it, I’m a Canadian citizen,” said Comeau on Friday. “I don’t see any reason why I can’t go buy merchandise anywhere in this country and bring it home. You can buy anything else like cars, clothes, everything. Except for beer.”

During the trial, Comeau’s lawyers and the Crown delved into Canadian history, debating just what the framers of the 1867 founding document meant.

Andrew Smith, a professor of political history at the University of Liverpool in England, told the judge that a law banning the carriage of beer between provinces was a travesty of what the framers intended.

The defence had argued that the section of the Liquor Control Act is unconstitutional because Section 121 of the Constitution Act says all goods from a province are to be admitted free into each of the other provinces.

“Admitted free means of all impediments,” Smith had told the court in August of last year.

The Crown had countered that regardless of Section 121 of the Constitution Act, there are policies in place that limit free trade between provinces.