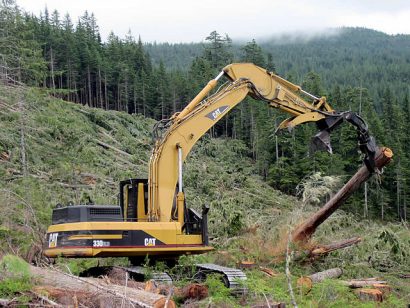 To trim emissions, the Forest Products Association of Canada will focus on improving its forest practices. Making better use of slash from fallen trees will be among its top priorities. PHOTO: David Stanley, via Wikimedia Commons

OTTAWA—Canada’s forest products industry is committing to cut its emissions of greenhouse gases by 30 million tonnes a year by 2030.

The industry association says about half the promised reductions will come from improved forest practices, including using the slash from downed trees rather than burning it or letting it rot and emit methane.

Improved and expanded use of carbon-sequestering wood products, plus efficiencies in mill operations will make up the balance of the emission cuts.

Derek Nighbor, the new CEO of the Forest Products Association of Canada, says the federal government’s Canadian Forest Service estimated how much the forestry sector could contribute to reducing emissions and the industry bettered that estimate.

As part of the most recent United Nations climate negotiations in Paris, Canada committed to cut its overall emissions 30 per cent below 2005 levels by 2030—a reduction that amounts to about 225 million tonnes a year.

The forestry industry association says its carbon measures will make up about 13 per cent of that 2030 emissions promise and that the industry will be tracking its progress to ensure its emissions are coming down.

“We’re the first industry to come forward with a comprehensive plan and it’s a plan that we’re going to be reporting on every three years,” Nighbor said May 2 in an interview.

The forestry association is also contributing to all four federal-provincial policy working groups that are negotiating policy options for a pan-Canadian climate plan to be hammered out next fall. Those working groups, formed following a first ministers’ meeting in Vancouver at the beginning of March, were given six months to find some common ground on areas such as climate mitigation and adaptation, carbon pricing and clean technology innovation.

The forestry association’s “30 by 30 climate change challenge” is part of an intense lobbying effort that includes seeking government financial support for cleantech research and development and forest products procurement as part of infrastructure spending.

“There are a few levers here we need the government to pull,” said Nighbor.

The forestry sector says it has spent $1.5 billion on cleantech innovation over the last five years and that since 1990 it has reduced emissions from existing mills by two thirds.

Canada is also re-introducing taller wood structure buildings, including construction of an 18-story residence at the University of British Columbia in Vancouver and a 13-story building in Quebec City. The association argues that wood laminate buildings not only sequester the carbon in the timber for the life of the building, they also don’t require the carbon-intensive concrete or steel of more conventional tall structures.