PM Justin Trudeau and Mexican President Enrique Pena Nieto say they're committed to going back to the negotiating table, but given the current state of relations between the NAFTA countries, that won't be easy 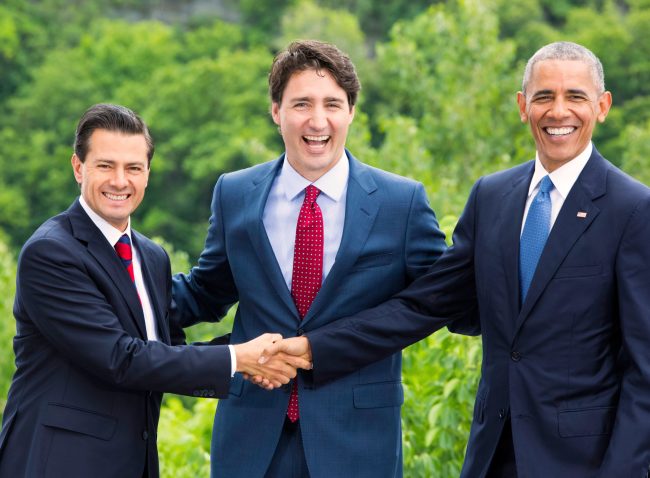 Trudeau and Pena Nieto may be nostalgic for the days when their U.S. counterpart was decidedly more enthusiastic about free trade. PHOTO: Presidencia de la República Mexicana

WASHINGTON—Now they put their noses to the grindstone and get back to the North American Free Trade Agreement. But it is shaping up to be a complicated, uphill slog.

Mexico and Canada have renewed their commitment to the bare-knuckled NAFTA renegotiation after absorbing the blow of the Trump administration’s decision to impose potentially debilitating new tariffs on steel and aluminum imports.

The dragging on of the NAFTA talks was a key reason behind the U.S. move to target Canada and Mexico, but given the importance of that trade agreement to the continent’s economy, neither U.S. neighbour was deterred.

Prime Minister Justin Trudeau and Mexican President Enrique Pena Nieto made their commitment in a Thursday phone call, following Trump’s decision not to exempt their countries from import duties of 25 per cent on steel and 10 per cent on aluminum.

Canada retaliated with $16.6 billion worth of “countermeasures” that hit a range of products from flat-rolled steel to playing cards, while Mexico also plans tariffs on a variety of U.S. products, including flat steel.

Related: Canada responds to U.S. steel, aluminum tariffs with ‘countermeasures’ of its own

“The leaders expressed their strong concerns and deep disappointment with the imposition of U.S. tariffs on Canadian and Mexican steel and aluminum exports,” Trudeau’s office said in a summary of the phone call with the Mexican leader.

“They also discussed the North American Free Trade negotiations and agreed to continue working toward a mutually beneficial outcome.”

Trump said in a statement the days of the U.S. being taken advantage of in trade deals “are over.”

On NAFTA, Trump said: “Earlier today, this message was conveyed to Prime Minister Justin Trudeau of Canada: The United State (sic) will agree to a fair deal, or there will be no deal at all.”

A fair deal is the furthest thing from Trump’s mind, something that Thursday’s sweeping tariffs decision demonstrates, according to business leaders and trade analysts.

Some question whether there might actually be a negotiating table to return to given the reality of the political calendar. Mexico’s presidential election is one month away and the U.S. Congressional midterms follow in the fall.

Trump’s latest move amounts to “blackmail” in the NAFTA renegotiation, but it doesn’t kill chances of carving out a deal, says a veteran of Canada’s free trade battles.

Perrin Beatty, the president of the Canadian Chamber of Commerce, said Canada should not walk away from the NAFTA table.

“We should not ever agree to blackmail of the nature that was proposed here,” said Beatty, who was a federal cabinet minister at the time of the original Canada-U.S. free trade negotiation that was NAFTA’s precursor.

“We should remain at the table as long as there is a table to remain at, and look for a deal in which everyone wins.”

Beatty said future negotiations have been altered by Trump’s “classic bully techniques” which are designed “to extort the conditions that Donald Trump wants to see in NAFTA.”

Eric Miller, of the Washington-based Rideau Potomac Strategy Group, said it is possible to move forward with NAFTA on a separate track from the tariff dispute. That’s not unprecedented because when the original Canada-U.S. free trade talks were happening, the two countries were mired in the softwood lumber dispute.

But this time it’s different, he said.

The key is for Canada to move forward with NAFTA while keeping the “damage done” in steel and aluminum contained in its own separate lane. After parsing the statements of Foreign Affairs Minister Chrystia Freeland and U.S. Commerce Secretary Wilbur Ross, Miller said it is clear the two countries want to do that.

“If the U.S. thinks this, in some way, will soften up Canada’s position or make it want to give concessions to resolve the NAFTA, they are misunderstanding the situation,” he said.

“Canada knows this is the big ball game and they have said from the very beginning they’re not going to yield to pressure tactics.”

A leading American trade lawyer says the window for serious NAFTA negotiations has simply closed for the year because it has been overtaken by the political calendar.

“I believe the real challenge on NAFTA will be Mexico. I do not believe we can proceed in any significant way on NAFTA before the July 1 election,” said Dan Ujczo, of the firm Dickinson Wright PLLC.

Others say there’s no way NAFTA’s negotiators can look each other in the eye after Thursday’s developments.

“It’s hard to imagine how you negotiate with a knife to your throat,” said Jean Simard, president of the Aluminum Association of Canada.

“I would break it off. That’s not good faith.”