'That was then, now is now' Mulroney said of his longstanding rivalry with the elder Trudeau. He's now assisting Justin Trudeau's government prepare for high-stakes U.S. trade talks 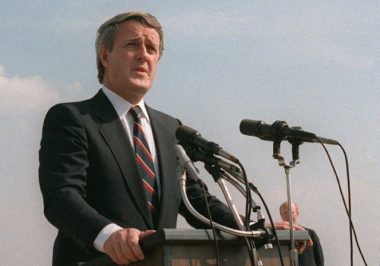 Serving as Prime Minister in the 1980s after Pierre Trudeau, Mulroney had a troubled relationship with the elder Trudeau

WASHINGTON—In six simple words, Brian Mulroney sweeps aside the glaring irony of his new political mission: assisting a Trudeau government, an assignment that will even see him participate in a cabinet session.

Mulroney once spent an entire chapter of his memoirs excoriating Pierre Trudeau—his personal nemesis, prime ministerial predecessor, and partisan rival. Yet his work with Trudeau’s son on the Canada-U.S. file will culminate April 6 in a meeting with ministers on upcoming NAFTA renegotiations.

“That was then, now is now,” Mulroney said in an interview last week, when he was in Washington for the annual gathering of the Horatio Alger Association as it awarded scholarships to youth with troubled backgrounds.

“My wife and I have been friendly with the present prime minister—as has my family—for many years. He has always treated us with great courtesy and respect. He’s the one I deal with. He sets the tone.”

The story of how Mulroney got involved in modern-day Canada-U.S. relations stretches back before the last federal election—Mulroney had known the Liberal leader since his childhood and heaped praise on him.

But it really started the morning after Donald Trump’s groundshaking election win.

Last Nov. 9, a group of government officials huddled to assess what had just happened, how it affected Canada, and what personal connections they might have to the incoming Trump team. There weren’t many. While the Liberals had multiple relationships with the Clinton team, there were scant points of contact with the political outsider who shocked the Republican party, then the world.

There was one famous exception. In a community of moneyed Florida snowbirds, Mulroney had become friendly with Trump and was especially close to his incoming point man on NAFTA, Wilbur Ross. Even the Trump-Mulroney children had struck friendships.

“The name that kept coming up again and again was Prime Minister Mulroney’s,” said one person involved in the Nov. 9 talks.

“Almost everybody we called with even a tangential relationship with Trump said Mulroney was the guy to talk to.”

Mulroney has since had several phone chats with the prime minister, that source said. He’s also volunteered in three ways: establishing connections, offering advice, and conveying one country’s perspective to the other.

For example, the source said, if the Americans were upset about trade deficits, Mulroney might point out to Ross how the deficit with Canada was a non-issue—largely attributable to swings in oil prices beyond any government’s control.

Mulroney wasn’t the only bridge-builder: Chrystia Freeland set up the initial meetings in New York between the Trudeau and Trump teams.

He credits everyone for making the most of these new connections.

“I can tell you I’ve heard from two leaders of the American administration… telling me the Canadians… were the best and the nicest people the Americans were able to deal with anyone around the world,” he said.

“How do I know that President Trump feels that he had a very good meeting with the prime minister and he liked him a lot?… Because he told me. At dinner… They just hit it off… He liked the cut of his jib. He liked the way he spoke. He liked a lot of things.”

Mulroney is equally laudatory of the opposition’s behaviour: he says Rona Ambrose and the Conservatives have lowered the partisan temperature on a critical issue of national interest, and sent a letter offering help wherever possible.

“This is a national challenge,” Mulroney said.

“If we were ever to lose NAFTA you’d see grave challenges in Canadian society. So in something like this there’s not a Conservative, or a Liberal way to look at this. There’s only a Canadian way.”

He said that example of Canadians sticking together got noticed in Washington. In comparison, U.S. politics has been riven by partisanship even on touchy international matters, like the handling of Russian meddling in the last U.S. election.

This spurt of bipartisanship also contrasts with another important national moment, which Mulroney recalls with sadness: the effort to reach permanent constitutional peace with Quebec.

He says Trudeau poisoned good-faith efforts at constitutional reform and refers to him as an adversary; a draft-dodging, fascist sympathizer in his youth; and describes his legacy as an “economic and fiscal wreck.”

He says he tried showing Pierre Trudeau respect as a former prime minister—inviting him to represent Canada at forums abroad, commissioning a portrait of the Trudeau family, and seeking his input on the Constitution.

But without warning, he writes, Trudeau began launching broadsides against the Meech Lake Accord—he called Mulroney a bungling weakling who kowtowed to the snivelling, spoiled, adolescent Quebec nationalists.

Mulroney’s book expresses admiration for a distinct American tradition: the mutual courtesy historically shown between past and present presidents. The 2007 tome also foreshadows the future—it says nice things about ”a fine young man,” Justin, who would someday have him back on Parliament Hill.

As for his advice on NAFTA, Mulroney stays tight-lipped. He says he foresees tough negotiating, urges Canada to be patient, and says it’s important that if talks hit a rough patch, Trudeau can get the president on the phone.