In a speech at the World Economic Forum, the prime minister noted the U.S. absence from the revived TPP trade deal and said Canada is working hard to convince its closest trading partner of NAFTA's value 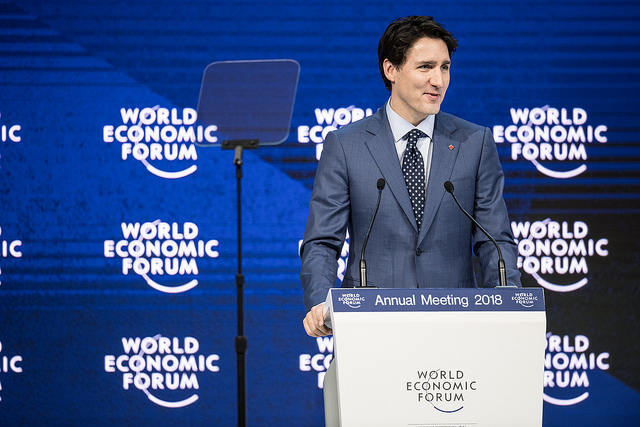 Trudeau said Canada and the 10 remaining members of the TPP had revised their trade pact in the wake of the U.S. withdrawal and was “working very hard” to convince President Donald Trump about the merits of the North American Free Trade Agreement.

Ross, who arrived at the WEF in Davos Wednesday, told reporters Trudeau’s speech was designed “to put a little pressure on the U.S. in the NAFTA talks.”

Treasury Secretary Steven Mnuchin added that the Trump administration believes in “bilateral trading agreements” but wants to make sure “U.S. opportunities are equal to other people’s opportunities in the U.S.”

Trudeau’s announcement about the new TPP came as the NAFTA partners gathered in Montreal for a week of negotiations.

There are concerns that the efforts in Montreal could be impacted by the new TPP, but the chief negotiators for Canada and Mexico brushed aside that notion on Tuesday.

NAFTA was expected to be the prime topic when Trudeau participates in a roundtable discussion later Wednesday with several U.S. business leaders in Davos.

The session was to involve several heavy hitters in U.S. business, including the CEOs of Dow Chemical, UPS, Cargill, Qualcomm Inc., Tyson Foods and the New York Stock Exchange.

Trudeau was also scheduled to hold bilateral business meetings Wednesday in addition to the roundtable with the heads of Royal Dutch Shell, Microsoft and Ericsson. He also has one bilateral meeting with a political leader—Argentine President Mauricio Macri.

Before leave Switzerland on Thursday, Trudeau is scheduled to attend a public session on the empowerment of girls and women and be joined by Pakistani activist and honorary Canadian citizen Malala Yousafzai.

Trudeau did meet with Israeli Prime Minister Benjamin Netanyahu on the sidelines of the WEF Wednesday, but the Canadian media travelling with the PM did not receive a customary notification in advance.

The Prime Minister’s Office later apologized for issuing a late notice and promised to provide a summary of what it called a “last-minute pull-aside” meeting between the two men.

The Trudeau-Netanyahu chat comes weeks after the Canadian government chose to abstain from voting on a resolution condemning U.S. President Donald Trump’s decision to recognize Jerusalem as the capital of Israel and to relocate the American embassy.

Trump is scheduled to speak in Davos on Friday after Trudeau returns home.