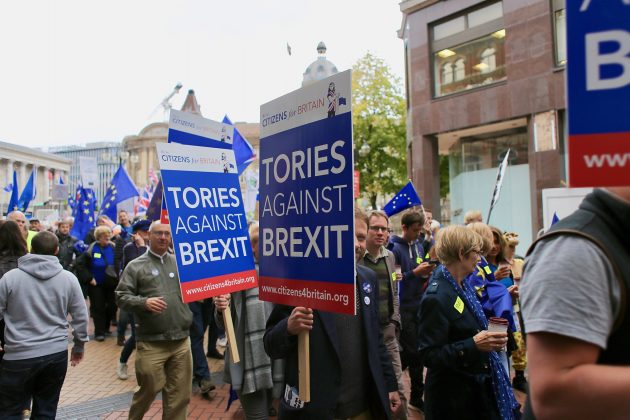 LONDON – With Brexit just seven weeks away, Britain’s ruling Conservative Party was locked in tense negotiations with itself Monday to rework the U.K.’s divorce deal with the European Union – as the EU stood firm in ruling out any renegotiation.

Meanwhile, pro-EU and pro-Brexit U.K. politicians traded allegations about whether Nissan’s decision not to build a new SUV in northern England was the latest Brexit-induced damage to Britain’s economy.

The group is holding three days of meetings with ministers and civil servants to investigate possible changes to the EU divorce deal, which was rejected by Parliament last month.

The changes centre on replacing a measure known as the backstop, designed to keep an open border between the United Kingdom’s Northern Ireland and EU member state Ireland.

The border area was a flashpoint during decades of conflict in Northern Ireland that cost 3,700 lives. The free flow of people and goods across the near-invisible frontier now underpins both the local economy and Northern Ireland’s peace process.

The EU insists the Brexit withdrawal agreement can’t be renegotiated, and has already rejected some of the arrangements under discussion in London, including a time limit on the backstop and unspecified technological solutions to customs checks.

German Chancellor Angela Merkel said Monday the already-agreed Brexit withdrawal agreement could not be renegotiated, although questions surrounding border arrangements could be addressed in a declaration on the future relationship between the EU and Britain.

Speaking during a trip to Japan, she said a Brexit agreement was still possible, but first “we must hear from Great Britain how they envision that.”

May has not spoken to EU leaders since Wednesday, a day after British lawmakers instructed her to seek changes to the Brexit withdrawal agreement she had spent a year and a half negotiating with Brussels.

But May’s spokesman, James Slack, denied that the Brexit process was deadlocked. He said the government was working with “urgency” on border solutions.

“What we are doing right now is working at home on the proposal we will take to Brussels,” he said.

Britain is due to leave the bloc on March 29, and the government doesn’t have an approved agreement on the rules and conditions that will replace the 45 years of frictionless trade that came with being an EU member.

Many businesses fear a cliff-edge “no-deal” departure from the EU will cause economic chaos. The uncertainty has already led many firms to shift some operations abroad, stockpile goods or defer investment decisions.

Over the weekend, Japan’s Nissan said it had decided not to build the X-Trail model at its existing U.K. plant in Sunderland, England, cancelling plans announced two years ago after May’s government made undisclosed concessions designed to ensure the carmaker’s ability to compete after Brexit.

The company said it instead plans to consolidate production of the next generation X-Trail at its plant in Kyushu, Japan, where the model is currently produced. It will continue producing three other models at the Sunderland plant, which employs 7,000 people.

The company said it had made the decision “for business reasons,” but added that “the continued uncertainty around the U.K.’s future relationship with the EU is not helping companies like ours to plan for the future.”

Pro-Brexit British politicians insisted the decision was motivated largely by falling sales of diesel vehicles in Europe, rather than by Brexit.

He said senior Nissan managers had told him that a no-deal Brexit would “cast a shadow over their future in Britain.”

Geir Moulson in Berlin contributed to this story.