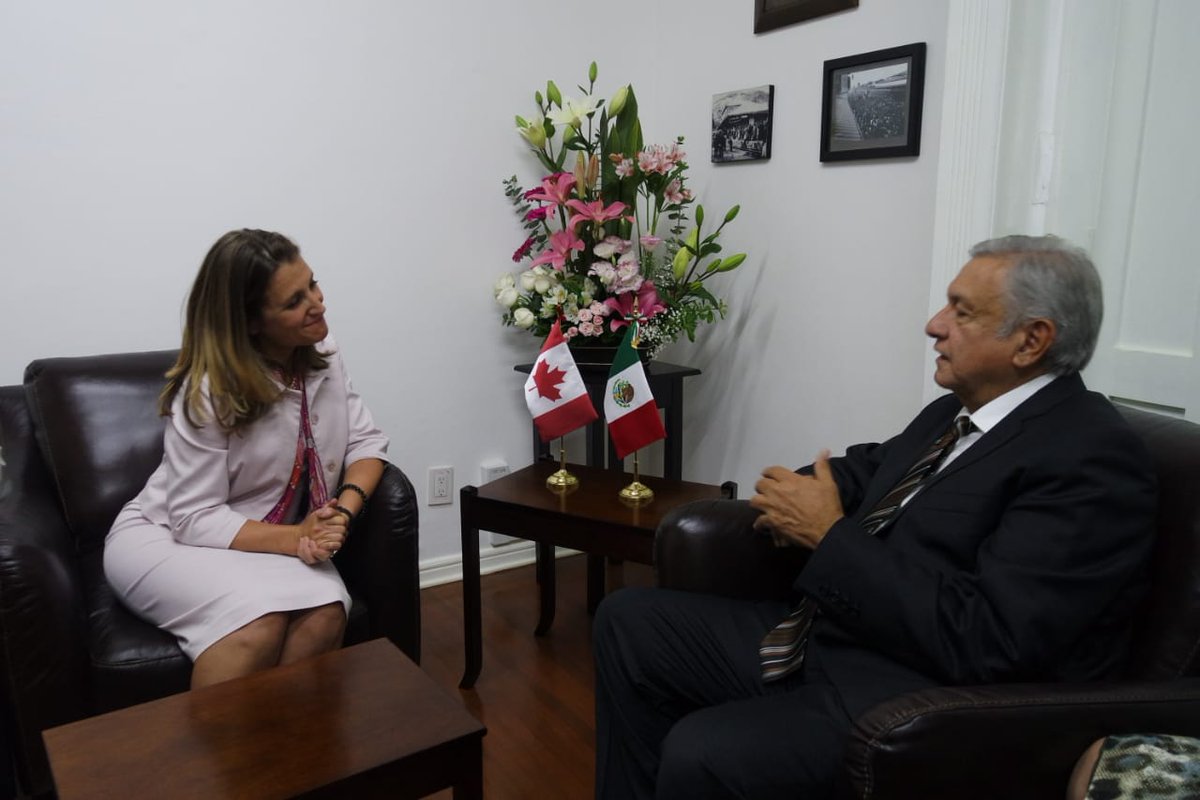 OTTAWA – Canada’s foreign affairs minister says a meeting with Mexico’s president-elect has cleared the haze about diving back into free trade talks between Canada, the United States and Mexico.

The meeting between Foreign Affairs Minister Chrystia Freeland, Finance Minister Bill Morneau and International Trade Minister Jim Carr with Andres Manuel Lopez Obrador came one day before his representatives travel to the U.S. to talk to American trade negotiators and in the shadow of a simmering trade war with the Trump administration.

Freeland spoke in broad, largely positive terms about the meeting with the 64-year-old political veteran, but wouldn’t detail what he told Canadian officials. Freeland said she was “hopeful” NAFTA talks could hit high gear now that she gauged the policy pulse of Canada’s new political neighbour in North America.

“It was important to meet with the president-elect and with his team to understand their position so we really knew where Mexico was,” she said in a conference call from Mexico City.

“We have a clear understanding now and we certainly are very committed to moving forward as quickly as we can.”

Lopez Obrador and his top officials have said they back the North American Free Trade Agreement, emphasizing that talks about North American trade must involve all three countries – eschewing the idea of a one-on-one deal with the Americans.

Lopez Obrador, who goes by the nickname AMLO, is “astute enough to recognize that Trump is playing a game and trying to divide and conquer his two NAFTA allies,” said Laura Macdonald, an expert on Mexican politics from Carleton University in Ottawa.

But, she cautioned, “we never know.”

Carlo Dade, an expert on Latin American politics from the Canada West Foundation, said the uncertainty around trade pacts in North America as well as with Pacific Rim countries means Canadian politicians need to build up a personal relationship with Lopez Obrador, something which can often get overlooked.

“There’s an expression in Spanish: ‘hasta en la sopa’ – even in the soup. It’s when you keep running into someone every time you turn around and that, I think, could potentially be us and Mexico at the trade table.”

NAFTA negotiations were paused in late spring because of the July 1 Mexican presidential election that Lopez Obrador won with a majority of the popular vote. He assumes office in December.

Trump viewed Lopez Obrador’s victory at the national and state levels as a symbol of political strength, and that’s a significant factor in the relationship between the two men, said Duncan Wood, director of the Mexico Institute at the Washington-based Woodrow Wilson Center.

“Trump sees AMLO as a strong leader, as a legitimate leader, somebody to be taken seriously. He didn’t always see (outgoing Mexican President) Enrique Pena Nieto in that way,” Wood said.

In a letter to Trump earlier this month, Lopez Obrador called for talks between all three countries to avoid prolonged trade uncertainty that could damage economies. Trump’s reply to Mexico said such a deal would help both countries, “but only if it can go quickly, because otherwise I must go a much different route.”

A number of issues remain unresolved in the talks, including U.S. demands for changes to rules of origin for automobiles, a five-year sunset clause for a new pact and demands for Mexico to quickly hike wages.

The five-year review is more problematic and Freeland said Canada’s opposition to it has stiffened throughout the talks.

In the meantime, Trump is considering imposing a 25 per cent tariff on auto imports that Republican lawmakers, industry – although his own administration officials warn that such a step could kneecap the American economy.

The World Trade Organization said in a report Wednesday that the proliferation of tariffs by the United States, Canada, Mexico and the European Union among others “could place economic recovery in jeopardy.”