May is making a last-ditch effort to find a compromise Brexit deal. If EU leaders refuse to grant a second extension, Britain faces a sudden departure on Friday 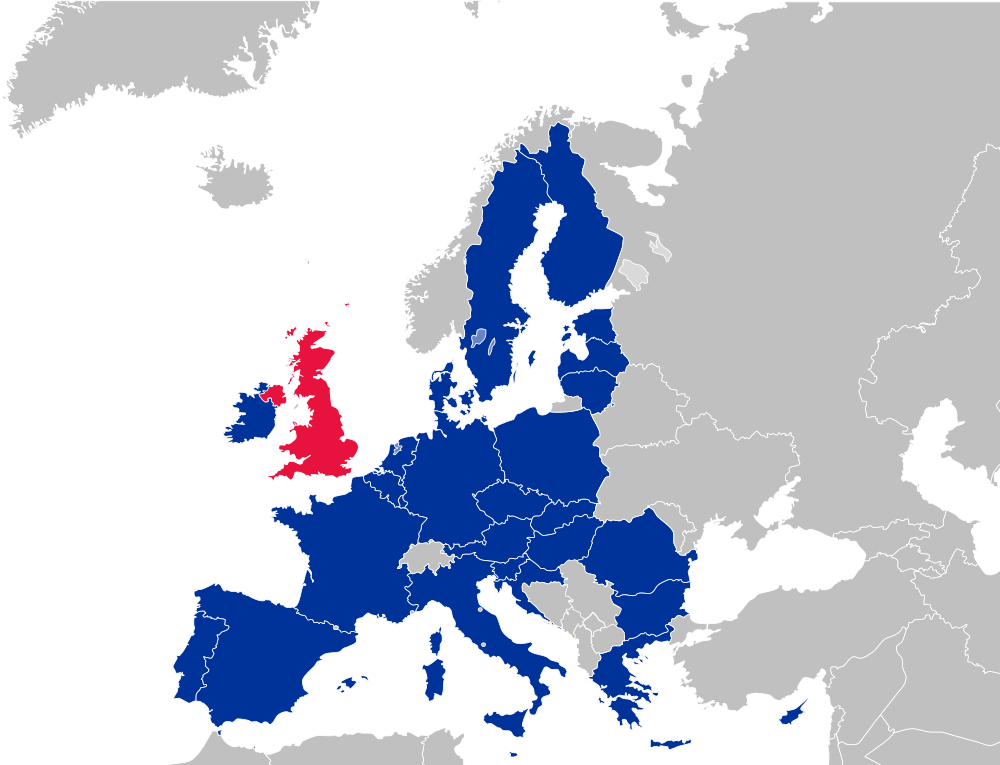 PHOTO: Map of the European Union (EU-28), with the United Kingdom highlighted due to the triggering of Article 50 on 29 March 2017/Inops via Wikimedia Commons

BERLIN – Prime Minister Theresa May brought her case for a further delay to Britain’s departure from the European Union to Berlin on Tuesday, while German and French officials insisted that any extension to the deadline must come with strings attached and assurances from London.

May and German Chancellor Angela Merkel met for about an hour and a half, shaking hands for photographers but making no remarks to reporters. The German government had no comment on the outcome of the talks. May was headed to Paris later to meet French President Emmanuel Macron, who has appeared to take a harder line on cutting Britain more slack.

Britain’s partners in the 28-nation European Union say they want clarity from May about what she will do to break the Brexit logjam if another delay is granted. Officials are signalling that they’re not keen to give Britain a blank check, though they also want to avoid a chaotic Brexit later this week.

Michael Roth, Germany’s deputy foreign minister, said as he arrived at an EU meeting in Luxembourg that “we are in a very, very frustrating situation here.” But he also said that a disorderly Brexit would be “the worst of all options on the table.”

May’s Conservative government and the main opposition Labour Party have been trying to find a compromise Brexit deal before EU leaders decide Wednesday whether to grant a second extension to the U.K.’s departure. If they refuse, Britain faces a sudden departure on Friday, the deadline set a few weeks ago by the EU. The country was originally supposed to leave on March 29.

May has asked for a new delay until June 30.

“We expect finally to have substantial steps in the right direction – so far absolutely nothing has changed,” Roth said. “We are of course considering an extension, also a longer extension, but it must be linked to very strict criteria,” he added, insisting that Britain can’t speculate about not participating in the May 23-26 elections for the European Parliament.

Roth said that “within the European Union, there isn’t an endless readiness to keep talking about delays so long as there is no substantial progress on the British side.”

European Council President Donald Tusk has urged the 27 remaining EU nations to offer the U.K. a flexible extension of up to a year to make sure the nation doesn’t leave the bloc in a chaotic way that could undermine trade and hurt many EU nations.

France’s European affairs minister, Amelie de Montchalin, said the 27 will need commitments from May that the British government will continue to play a constructive role in EU decision-making if a long extension is to be granted.

“We have the question what role Britain wants to play” if such an extension is granted, she said.

In Britain, some have suggested that the government should seek to undermine EU policymaking as a way to get more leverage for the U.K. Roth also called for “loyal and constructive behaviour” by the British government.

Half a dozen countries planned to co-ordinate their approach ahead of the Brussels summit. An official who asked not to be identified because the informal meeting was not officially announced said leaders of France, the Netherlands, Ireland, Belgium, Sweden and Denmark would discuss options hours ahead of Wednesday’s dinner summit.

Irish Foreign Minister Simon Coveney said that officials in other EU countries “will want to encourage” the Conservative-Labour talks in London.

“But they’ll also want to see a clear plan in terms of how an extension can deliver the result that we all want, which is a managed and sensible Brexit.”

In Britain, Justice Secretary David Gauke told the BBC it was too early to say whether the talks would be successful but work was continuing to identify a compromise. He said people involved “are telling me that the process is being undertaken in a genuine and sincere way from both sides.”

Raf Casert in Brussels and Danica Kirka in London contributed to this report.