The scientists' opinions run counter to Alaska elected officials, who strongly support opening Arctic waters to drilling as a new source of oil for the trans-Alaska pipeline 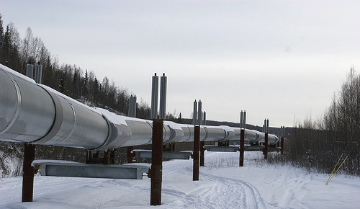 ANCHORAGE, Alaska—Nearly 400 scientists have signed a letter urging President Obama to eliminate the possibility of Arctic offshore drilling in the near future by taking the Arctic Ocean out of the next federal offshore lease sale plan.

The scientists include Jane Lubchenco, Obama’s former administrator of the National Oceanographic and Atmospheric Administration, now a researcher and teacher at Oregon State University.

“I’ve witnessed some of the unprecedented changes underway in the Arctic” Lubchenco said in a prepared statement. “Conserving important marine areas is an essential step in sustaining the region’s resilience.”

The 388 signees include scientists from 13 countries and 25 current or emeritus professors at the University of Alaska. Their opinion runs counter to Alaska elected officials, who strongly support opening Alaska waters to drilling as a new source of oil for the trans-Alaska pipeline.

The Interior Department is collecting public comment through Thursday on the proposed 5-year oil and gas leasing program, which would cover 2017 to 2022.

Environmental groups strongly oppose Arctic drilling. They say industrial activity will harm marine mammals already hurt by a loss of sea ice and that global warming will be accelerated by burning oil found in the Arctic Ocean.

Two sales in Arctic waters are in the plan: the Beaufort Sea, off Alaska’s north shore, in 2020, and the Chukchi Sea, off the northwest coast, in 2022.

The letter was released by Pew Charitable Trusts. Pew’s Arctic science director, Henry Huntington, said the Obama administration has been clear that it wants decisions to be science-based. The letter is a chance for scientists to weigh in on decisions in the Arctic, a region that’s rapidly changing.

“It’s hard to know what’s coming next, so caution is a good idea,” he said.

The White House and the Interior Department, said Gov. Bill Walker in an email message Tuesday, will be subjected to incredible pressure to make the lease sales so restrictive that it makes little sense for companies or the state to participate.

“We can protect the ocean and develop,” Walker said. “The whaling captains we have talked with tell us it is important to move forward with development. Their communities depend on it. They also believe they can balance development with their subsistence way of life.”

Her decision followed a Sept. 28 announcement by Royal Dutch Shell PLC, the only company in the last decade to drill in federal waters, that it would cease exploration in the Chukchi and Beaufort seas after spending upward of $7 billion. The company cited disappointing results from a well drilled in the Chukchi and the unpredictable federal regulatory environment.

The Chukchi and the Beaufort hold an estimated 23.6 billion barrels of conventionally recoverable oil—enough to meet all of California’s demands for oil for 37.5 years, they said.

Drilling was proven safe though dozens of wells in the 1980s and ’90s, they wrote.

“We must warn against any attempt to use past lease sale cancellations and the chaotic regulatory regime that Interior has imposed as evidence of a ‘lack of industry interest’ in offshore Alaska,” they said.