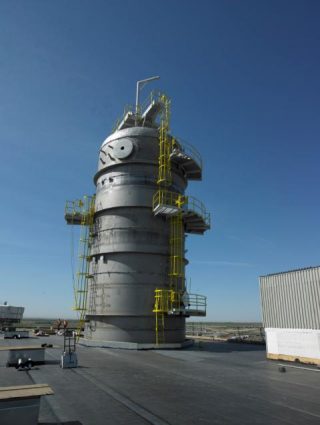 A carbon dioxide stripper at SaskPower’s Boundary Dam. The project has captured 800,000 tonnes of CO2 over the past 12 months, but came with a hefty price tag. PHOTO: SaskPower

REGINA—SaskPower says its Boundary Dam carbon-capture facility at a coal-fired power plant has captured 800,000 tonnes of carbon dioxide in one year.

SaskPower CEO Mike Marsh says the facility has eliminated emissions equal to taking 200,000 cars off the road in the last 12 months.

The $1.5-billion carbon-capture facility near Estevan opened in October 2014.

It faced technical and mechanical problems and worked 45 per cent of the time in its first year of operation.

Marsh has said it’s normal for any energy plant to have to work out kinks in the first year and the sale of captured CO2 is offsetting the penalties.