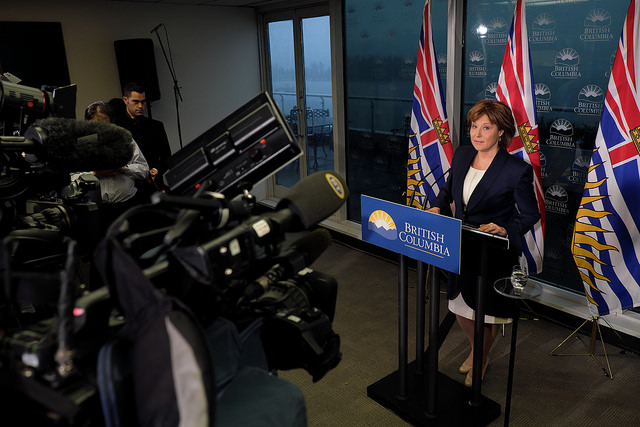 B.C. Premier Christy Clark said the province may have to put the pan-Canadian climate deal on hold as it takes a closer look. PHOTO: Province of British Columbia, via Flickr

OTTAWA—A day-long meeting of first ministers on finalizing a pan-Canadian climate plan is off to a fractious start.

Saskatchewan Premier Brad Wall is flatly asserting he won’t be signing any agreement today on a national carbon price, while B.C.’s Christy Clark says elements of the deal may have to be set aside for further assessment.

Wall is dead set against a federally imposed tax on carbon dioxide emissions, saying Ottawa has failed to provide an economic analysis of the biggest tax change in a generation.

He said the federal plan will result in a competitive “imbalance” given the number of emitters in central Canada, where cap-and-trade will mitigate emissions, resulting in a lower carbon price than in western Canada.

“We are rushing into this—without the benefit of due diligence, without an impact assessment so we can look Canadians in the eye and say, ‘This is what it’ll do to your job, by the way, if you work in agriculture, in mining or energy or other trade-exposed industries.’

“We’re doing it without the benefit of a study that’ll say, And this is what it’ll do to your household budget.’ We will not be signing this framework today, for these and other reasons.”

Clark, meanwhile, says she can’t agree to an escalating national carbon price when Quebec and Ontario’s cap-and-trade system would mean lower carbon prices per tonne in one part of the country.

The premiers also want to extract greater health care funding from the Liberal government, but several say they won’t be linking the two crucial issues of climate change and health spending during today’s talks.

The first ministers will have a special guest later in the day when U.S. Vice-President Joe Biden joins the gathering to talk about Canada-U.S. relations with president-elect Donald Trump gears up to take over the White House.

Biden didn’t mention Trump’s election victory when he spoke Thursday night at a dinner in Ottawa, but the vice-president did say liberals around the world would be looking to Trudeau to champion their beliefs in the coming years.

“The world’s going to spend a lot of time looking to you, Mr. Prime Minister, as we see more and more challenges to the Liberal international order,” Biden said.

“There’s a lot of soul searching going on in Europe and you saw some of it in my country.”