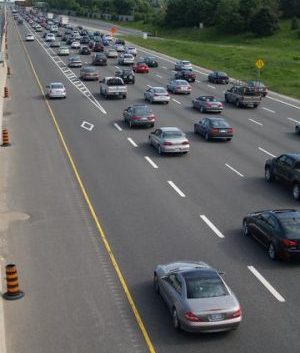 TORONTO—Gridlocked commuters traveling along a 10.4-kilometre strip of Highway 404 just north of Toronto have been granted a small reprieve.

Construction crews will begin widening the increasingly busy route between Highway 407 in Markham, Ont. and Stouffville Road outside Gormley, Ont. next year, the federal and provincial government announced Dec. 9.

The project will add a single high occupancy vehicle (HOV) lane in each direction, expanding the highway to eight lanes through Markham and helping to ease congestion.

The federal government will contribute up to $46 million to the expansion project, while Ontario will foot the remainder of the bill—though it did not release precise cost estimates.

The highway expansion announcement comes as the Ontario Liberal government faces significant criticism of their infrastructure oversight. Auditor General Bonnie Lysyk blasted the government last week for spending millions of taxpayer dollars on repair bills for shoddy road work and mismanaged transit projects, including paying for a bridge that was installed upside down.

Meanwhile, both the province and Toronto’s municipal government have been working to reduce the number of cars on the road throughout the GTHA, as well as find new revenue streams for maintaining the city’s aging highway infrastructure. The province recently rolled out new toll lanes along the QEW and last month Toronto Mayor John Tory introduced a contentious plan to charge drivers for accessing downtown Toronto using the Don Valley Parkway or Gardiner Expressway.

Along with the addition of two HOV lanes, the Highway 404 project includes building a 171-space carpool and transit parking lot at the 404 and Major Mackenzie Drive, as well as work on highway overpasses at 16th Avenue, Rouge River and Highway 7.

The province said it will start construction on the project next year, but does not expect to complete work until 2021.