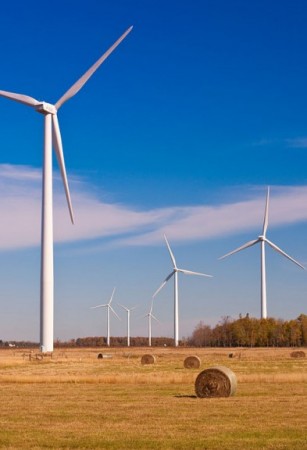 The Gunn’s Hill and Port Ryerse Wind Farms will keep the lights on for thousands in Southwestern Ontario PHOTO: Ernesto Andrade, via Wikimedia Commons

The project’s success involved the collaboration of OCEC, Oxford County, and the Six Nations of the Grand River. Organizations involved include developer Prowind Canada Inc. and Bullfrog Power, which first announced its support in 2014.

“Bullfrog Power’s early partnership with the co-operative was an important show of support that contributed to its success,” said Helmut Schneider, president of Prowind Canada Inc. and former CEO of OCEC. “Today, the Gunn’s Hill Wind Farm provides an opportunity for community members to directly benefit from new renewable energy generation in their area.”

In September 2015, Oxford County adopted a sustainability plan to achieve 100 per cent renewable energy by 2050.

Boralex inc., a Canadian firm that builds and operates renewable energy facilities in North America and Europe, announced the commercial operation of the Port Ryerse Wind Farm on Jan. 30.

The farm is located on privately-owned lands east of the hamlet of Port Ryerse in Norfolk County, Ontario, near Brantford.

Representing an investment of slightly over $37 million, the project includes four turbines, with an installed capacity of 10 MW, and is endowed with a 20-year power purchase agreement with Independent Electricity System Operator, a Crown corporation responsible for operating the electricity market in Ontario.

“After the recent acquisition and commissioning of a 230 MW wind farm project in Ontario, Port Ryerse Wind Farm is another great achievement that strengthens our position on the Ontarian market, bringing us closer to our goal to reach 2,000 MW by 2020,” said Patrick Lemaire, president and CEO of Boralex.

The Port Ryerse Wind Farm will supply electricity to nearly 1,965 people every year during its operation period, while avoiding 12,200 tons of CO² emissions.