by John Cotter, Dean Bennett and Dan Healing, The Canadian Press  May 17, 2016

The Conference Board of Canada has estimated that more that $1 billion in oilsands production has been lost due to shutdowns, and that was before the latest wildfire began menacing the area 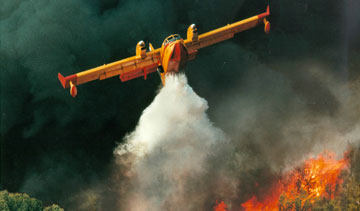 The Rural Municipality of Wood Buffalo issued an emergency alert about 10 p.m. on May 16, prompted by the threat of a quickly spreading wildfire.

The evacuation zone now stretches about 50 kilometres north of Fort McMurray to just south of Fort MacKay, and includes Syncrude and Suncor facilities, along with several smaller operations.

The alert instructs all camps and production facilities to evacuate immediately, and for all evacuees to head south on Highway 63 “if possible.”

“The urgency that we are looking at is with regards to the oil and gas infrastructure,” said Scott Long of the Alberta Emergency Management Organization at a briefing earlier Monday.

“Everything within Fort McMurray itself, the community, all controlled, orderly. There is no panic there.”

Late Monday, Suncor issued a news release confirming it had “started a staged and orderly shutdown of our base plant operations” and that personnel were being transported to work camps further north.

It stressed there has been no damage to Suncor infrastructure.

“Suncor has enhanced fire mitigation and protection around all of its facilities,” said the release. “When it is safe to do so, we will continue implementing our restart plans.”

High winds have spurred the quickly spreading wildfire as tinder-dry conditions persist in the region.

More than $1B in oilsands production lost

The entire population of Fort McMurray, more than 80,000 residents, are now entering their third week away from home. Many of the work camps were used to house evacuated residents who fled north when fire broke through into the city the afternoon of May 3.

A new assessment of the economic impact of those Fort McMurray wildfires says close to $1 billion of oilsands production has been lost.

The Conference Board of Canada estimates that the fire in northeastern Alberta resulted in a loss of 1.2 million barrels of oil per day for two weeks, translating into $985 million in lost gross domestic product.

Twelve oilsands operations were shut down and several more curtailed output this month because of the wildfire that closed pipelines and forced the evacuation of more than 80,000 people from the area.

The Conference Board based its estimates on the assumption that most oilsands operations are active again by the end of the month, though that was before a new evacuation was ordered Monday that covered several oilsands sites.

The board estimates that the wildfire will reduce GDP growth in Alberta by one per cent in the second quarter but that will reverse into a one per cent gain in the third quarter as oilsands production resumes and rebuilding begins.

About 2,400 structures in Fort McMurray were destroyed by the wildfire, including 1,600 homes.

The board expects rebuilding efforts to add roughly $1.3 billion in real GDP to Alberta’s economy next year and construction in the region is expected to be higher than normal in 2018 and possibly 2019.

Last week, several banks lowered their national 2016 real GDP projections by 0.1 to 0.2 percentage points because of the wildfire.