With firefighters still battling the blaze, it's too early to measure the true toll of the fire, but economists say past disasters provide clues 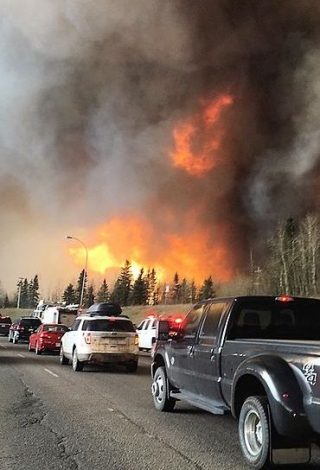 The wildfire in Alberta continues to rage as evacuees head for shelter. PHOTO: DarrenRD, via Wikimedia Commons

The growing emergency near Fort McMurray has forced several oil companies in the area to shutter operations that, combined, produce hundreds of thousands of barrels of crude each day.

Observers will be watching a key factor that will determine the magnitude of any fallout: the duration of the closures.

Experts say it’s too early to know exactly what lies ahead, but past events offer some clues.

BMO senior economist Robert Kavcic noted Thursday how real gross domestic product in Canada’s energy sector fell 4.2 per cent in May 2011 after an Alberta wildfire roared through the community of Slave Lake.

“That was big enough to pull Canadian growth down into negative territory temporarily, at least, for one month,” he said.

At the time, Statistics Canada highlighted the mining, oil and gas sector as the “main source” behind the overall real GDP decline in May 2011.

For the second quarter of 2011, Statistics Canada once again pointed to the wildfires, along with maintenance shutdowns, as a contributing factor to the headline real GDP figure for Canada, which contracted by 0.1 per cent.

A decrease of 3.6 per cent in real GDP that quarter in oil and gas extraction contributed to the reversal, Statistics Canada said at the time.

At the moment, experts are still trying to get a handle on the spreading wildfire near Fort McMurray.

The nearby oilsands represent the world’s third-largest reserve after Venezuela and Saudi Arabia.

“That this adds a heavy headwind to the economy in Q2 (the second quarter) is increasingly clear.”

The note also referred to the dismal March trade data released earlier this week. Those trade numbers suggest Canada’s second-quarter economic growth could be disappointing thanks to what’s shaping up to be a weak handoff from the tail end of the first quarter.

“The shock that is hitting the heart of Canada’s energy sector only adds to risk of very little growth in Q2 and risk of contraction,” the note said.

While the oilsands facilities themselves have so far been spared by the flames, the operations are suddenly facing a massive labour shortage because Fort McMurray was evacuated.

“It’s a question of, ‘When will companies be able to get workers back?’ ” Todd Hirsch, chief economist at ATB Financial, said in an interview Thursday.

Hirsch said if operations remain down for more than a couple of weeks, the economic damage will mount because the oilsands represent more than half of the province’s crude production. Even though oil prices are low, it remains a key commodity, he added.

And the fact all business operations came to halt in a Fort McMurray, a city of 90,000 people, could also affect Canada’s GDP reading for May.

“I think (the Fort McMurray fire) will be enough to move the needle into negative territory,” he said, noting that temporary business closures due to the 2013 floods in Calgary and Southern Alberta also pushed down the country’s GDP.

But even if the economy dips, Hirsch and Kavcic both said GDP could bounce back quickly from the destruction once the rebuilding process begins as it did following the Slave Lake fire and Alberta floods.

However, both also cautioned that GDP is not a good indicator under these circumstances.

Although reconstruction of a building adds to the GDP, they noted that replacing an old structure doesn’t represent new growth.