Money won’t save the planet, so philanthropy needs to adapt

Pitching in to help alleviate climate-caused disasters is admirable, but it doesn't solve the root problems 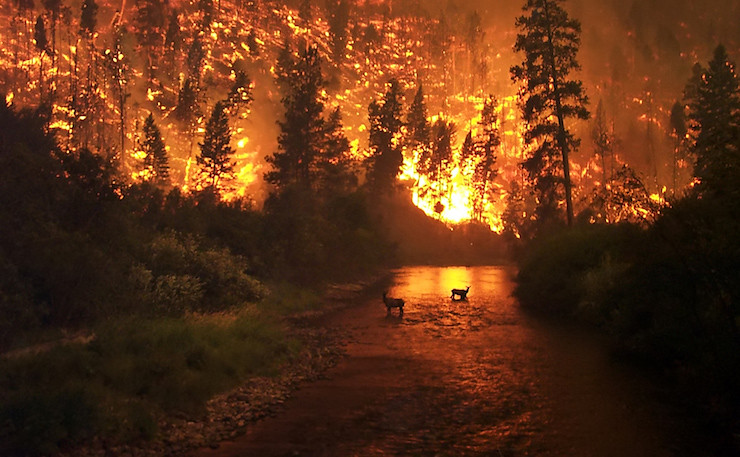 If we can help citizens rebuild their homes that were destroyed by fire, the revitalization of natural ecosystems that have been reduced to ashes is a different matter. PHOTO: project_lm9, via Creative Commons

The toll from the bushfires that ravaged Australia from September 2019 to the beginning of 2020 is staggering: more than one billion animals perished in the flames, 33 human lives were lost, 2,500 buildings were destroyed and more than 80,000 kilometres of land were burned.

Faced with the scale of this ecological and human tragedy, expressions of solidarity were immediate. We have seen petitions and fund-raising events blossom all over the world, on different platforms. This outpouring of generosity is reminiscent of those that followed the disasters in Southeast Asia such as the 2004 tsunami or the earthquake in Haiti in 2010.

This call for donations was also relayed by celebrities and the cultural and sports worlds. The most viral story was undoubtedly that of Celeste Barber, an Australian actress, who in four days managed to raise more than A$44 million for the New South Wales Rural Fire Service.

But is this influx of money still relevant in light of climate change? Our research group, Phi-Lab, the Canadian Philanthropy Partnership Research Network, has been working on this question.

The gift of urgency and emotion

Gifts motivated by urgency and emotion are aimed, first and foremost, at stopping what is considered unsustainable. Horrible images must be stopped. Immediate capital donation, in this context, attempts to provide technical and human means to end the crisis. In the longer term, donations from philanthropic support will be used for reconstruction projects.

We are therefore in the presence of a philanthropy known as “classic philanthropy,” understood here as a cash donation made with the aim of meeting immediate needs.

This form of philanthropy alleviates the consequences generated by a problematic situation, such as that in Australia, which appears exceptional enough for human emotion to take a central place in the decision to give.

Without calling into question the good intentions behind gestures of solidarity in emergency situations, the question we ask is the following: in a context where natural disasters are and will be increasingly linked to climate change, is classical philanthropy as relevant as it once was?

We identify three inherent limits to this form of philanthropy: it cannot rebuild everything, it can lead to a loss of responsibility, it supports an unsustainable economy.

Can we buy back a destroyed ecosystem? If we can help citizens rebuild their homes that were destroyed by fire, the revitalization of natural ecosystems that have been reduced to ashes is a different matter. When damage affects biodiversity there are things that are, unfortunately, irreplaceable.

Therefore, in the face of the destruction caused by such disasters, we must admit the powerlessness of the classic gift of philanthropy. Capital does not rebuild a living species as it restores a cathedral, no matter how symbolic.

The recent situation, linked to the fire at Notre-Dame de Paris Cathedral, has given rise to an international philanthropic mobilization of great intensity, which has largely overwhelmed Parisians and Catholics. In 24 hours, 850 million euros were offered to the authorities concerned by a few international billionaires, either on their behalf or through their company or foundation. In doing so, individual donations have been raised all over the world.

Buying yourself a good conscience

Faced with the worsening of so-called natural disasters, philanthropic reactions, although sincere, often appear to be a way of circumventing our responsibilities.

In other words, we are faced with the polluter-pays syndrome, like the carbon tax. If I pay a financial tax, then I am buying myself a right not to change my attitude. This concept is similar to that of the 16th-century trade in indulgences of the Roman Catholic Church. We tend to react emotionally by choosing a compensatory solution that exempts us from assuming our responsibilities.

By limiting itself to compensation through reparation and not prevention through awareness and the adoption of appropriate regulations, classical philanthropy appears to be an incompatible response to the problems caused by the climate crisis. Designed to extinguish the flames, giving is in fact stifling another fire: that of human responsibility in the face of climate change and major social inequalities.

At the height of the crisis, Prime Minister Justin Trudeau urged Canadians to make a donation to help Australia as a gesture of solidarity. This in itself may seem appropriate.

However, is it the role of politics to appeal to the general public to fill the gaps in a collapsing global economic system? Shouldn’t it rather propose a revision of our way of life and our relationship with nature? Or listen to the public, especially young people, who are demanding profound changes in our relationship with the environment? Where are the responsible policies, norms and regulations consistent with the international solidarity demonstrated by the mobilizations for Australia?

To meet the great ecological challenge, political decision-makers will have to show courage in proposing and supporting the necessary changes. In this way, it will be possible to reconcile emergency philanthropy with philanthropy for social change, combining financial donations with responsible action. This shift in perspective must happen now. It is imperative.

For example, both Australia and Canada can do better in protecting their natural heritage. Australia has the largest number of endangered, natural or mixed sites, yet does not have many philanthropic foundations (only 5,000). The old colonial habits of reselling the resources on which the country was built, such as mining or extraction activities, are still very much present today.

Although Australia does not make every effort to preserve its natural heritage, it is nonetheless part of the global balance of the planet. Like the international institutions that have set themselves the mission of operating within the framework of a common humanity in order to enable the deployment of a common dignity, philanthropy has a duty to adapt to challenges and struggles that go beyond the charitable dimension.

We have a responsibility to preserve the world’s heritage. On this point, philanthropy can help, provided that it is defined and presented as a civic tool at the service of sustainable changes to be made and not as a gesture carrying a magical thought. The idea is not to slow down this solidarity that gives hope in times of crisis. However, the particular nature of the Australian disaster requires a frank and critical reflection in relation to spontaneous philanthropic movements.