Greens to vote against Liberal throne speech unless carbon targets toughened: May

"We could never vote confidence in a government that was pursuing pipelines and increasing greenhouse gases," The Green leader said 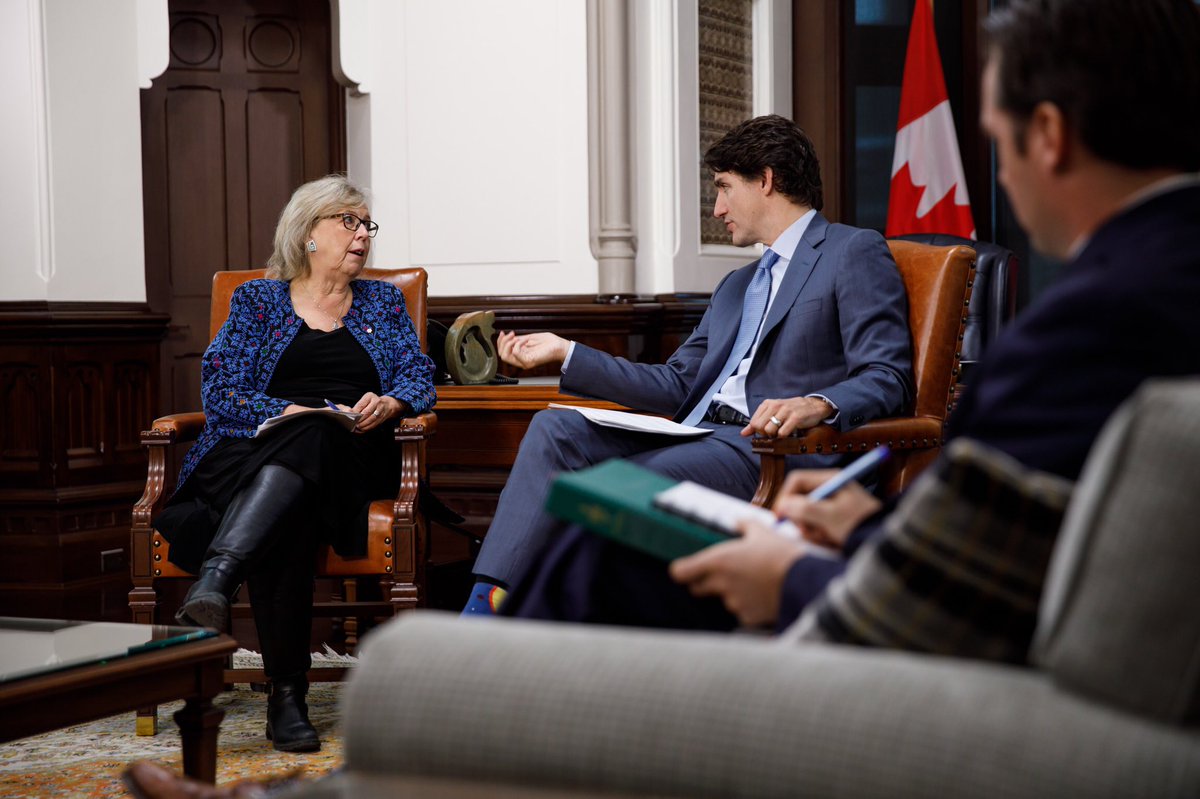 Trudeau and May discussed a number of areas where the Green party and Liberals share common ground. PHOTO: Justin Trudeau/Twitter

OTTAWA—Capping a week of meetings with opposition leaders, Justin Trudeau met Friday with the Green party’s Elizabeth May, who says she will vote against the Liberal government in confidence motions unless the prime minister commits to measures that lower Canada’s carbon emissions sharply.

May emerged from the morning meeting saying she invoked the names of Trudeau’s three children in her push for a more aggressive approach to fighting climate change.

“I was very clear with him. This is about whether Ella Grace and Hadrien and Xavier are going to have a livable world by the time they’re adults. This is not impersonal, this is real, it’s personal and it’s a question of moral courage.”

They discussed a number of areas where the Green party and Liberals share common ground, and May said her caucus of three will be willing to vote for individual laws that are in keeping with Green priorities, including implementing a universal pharmacare program and harmonizing Canada’s laws with the United Nations Declaration on the Rights of Indigenous Peoples.

But when it comes to confidence motions like the upcoming throne speech or the federal budget, which the Liberal minority can pass only with support from other parties, May said she cannot vote for the Liberals if they keep their recent course.

“We could never vote confidence in a government that was pursuing pipelines and increasing greenhouse gases,” she said.

The only way to get Green support would be either to stop pursuing energy projects like the Alberta-B.C. Trans Mountain pipeline expansion and the liquefied natural gas project in northern British Columbia, or to commit to more aggressive carbon-emissions targets.

The Greens campaigned on lowering emissions 60% below 2005 levels to help hold a global temperature rise to 1.5 C, as recommended by the United Nations intergovernmental panel on climate change.

As part of the 2015 Paris agreement, Canada committed to reducing its annual greenhouse gas emissions to 30% below 2005 levels by 2030.

During the election campaign, Liberals promised to put Canada on a path to being carbon-neutral by 2050—a move May applauded Friday as a step in the right direction. Carbon-neutrality would mean that every greenhouse-gas emission would be balanced by sucking an equal amount of greenhouse gas from the atmosphere.

That’s why she also urged the prime minister to attend an international climate change summit in Madrid next month, to push countries to be more ambitious in their emissions-reduction targets.

Attending would be difficult for Trudeau because the summit takes place as the Commons begins sitting again Dec. 5, with a throne speech that will lay out his general plans for governing. The U.N. gathering—the 25th Conference of the Parties to the United Nations Framework Convention on Climate Change, or “COP25” for short—runs from Dec. 2 to 13.

Nevertheless, for the leader of an oil-producing country to attend the international summit would send a strong signal to other nations, May said.

Trudeau told May he will discuss green issues with his environment minister once the new cabinet is sworn in next Wednesday. She said she anticipates Catherine McKenna will be moved from the role after holding it for the Liberals’ whole first term, speculating that rookie Liberal MP Steven Guilbeault, a long-time environmentalist, is an obvious choice for the position.

Trudeau also promised to bring new legislation to harmonize federal laws with the United Nations Declaration on the Rights of Indigenous Peoples (UNDRIP), addressing a key Green request, and to stave off the loss of abortion services in New Brunswick, May said.

May has stepped down as overall Green leader but is still the head of the Greens’ three-member caucus in the House of Commons.

Trudeau has sought common ground with the Conservative, Bloc Quebecois and NDP leaders in separate sessions over the last week as he prepares to return to Parliament without a majority in the Commons.

The Greens elected more MPs in the October vote than they’ve ever had, but remain the only party in the Commons that doesn’t have the numbers to give Trudeau’s Liberals a win by voting with the government if all the other parties don’t.

That made Friday’s meeting more a courtesy than a negotiation between rivals seeking to find compromises to advance their agendas.

Before their meeting began, Trudeau acknowledged there would be areas in which he disagrees with May, “probably on the level of ambition that you keep pushing us on,” he said.

He also recognized her decade of leadership of the Green party and fighting for action on climate issues, which he said has been a “significant contributor to the fact that we are not in discussions on whether we should fight climate change but on how best to fight climate change.”

May thanked Trudeau for the acknowledgment, then smiled.

“As former leader, I promise to be just as annoying.”