A recent study says a shortage of rain and snow can account for only about two-thirds of the river's 19 per cent decline; its two reservoirs are at less than half capacity 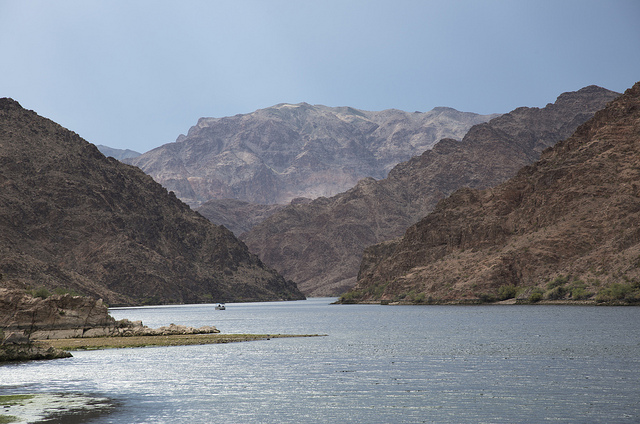 The Colorado is the most important waterway in American southwest. A drop in volume could mean trouble for cities and farmers across its 246,000-square-mile basin. PHOTO: John Fowler/Flickr

DENVER—Global warming is already shrinking the Colorado River, the most important waterway in the American Southwest, and it could reduce the flow by more than a third by the end of the century, two scientists say.

The river’s volume has dropped more than 19 per cent during a drought gripping the region since 2000, and a shortage of rain and snow can account for only about two-thirds of that decline, according to hydrology researchers Brad Udall of Colorado State University and Jonathan Overpeck of the University of Arizona.

In a study published last week in the journal Water Resources Research, they concluded that the rest of the decline is due to a warming atmosphere induced by climate change, which is drawing more moisture out of the Colorado River Basin’s waterways, snowbanks, plants and soil by evaporation and other means.

Their projections could signal big problems for cities and farmers across the 246,000-square-mile basin, which spans parts of seven states and Mexico. The river supplies water to about 40 million people and 6,300 square miles of farmland.

“Fifteen years into the 21st century, the emerging reality is that climate change is already depleting the Colorado River water supplies at the upper end of the range suggested by previously published projections,” the researchers wrote. “Record-setting temperatures are an important and underappreciated component of the flow reductions now being observed.”

The Colorado River and its two major reservoirs, Lake Mead and Lake Powell, are already overtaxed. Water storage at Mead was at 42 per cent of capacity Wednesday, and Powell was at 46 per cent.

Water managers have said that Mead could drop low enough to trigger cuts next year in water deliveries to Arizona and Nevada, which would be the first states affected by shortages under the multistate agreements and rules governing the system.

But heavy snow in the West this winter may keep the cuts at bay. Snowpack in the Wyoming and Colorado mountains that provide much of the Colorado River’s water ranged from 120 to 216 per cent of normal Thursday.

For their study, Udall and Overpeck analyzed temperature, precipitation and water volume in the basin from 2000 to 2014 and compared it with historical data, including a 1953-1967 drought. Temperature and precipitation records date to 1896 and river flow records to 1906.

Temperatures in the 2000-2014 period were a record 1.6 degrees Fahrenheit above the historical average, while precipitation was about 4.6 per cent below, they said.

Using existing climate models, the researchers said that much decline in precipitation should have produced a reduction of about 11.4 per cent in the river flow, not the 19.3 per cent that occurred.

They concluded that the rest was due to higher temperatures, which increased evaporation from water and soil, sucked more moisture from snow and sent more water from plant leaves into the atmosphere.

Martin Hoerling, a meteorologist at the National Oceanic and Atmospheric Administration who was not involved in the study, questioned whether the temperature rise from 2000 to 2014 was entirely due to global warming. Some was likely caused by drought, he said.

Udall said warming caused by climate change in this century will dwarf any warming caused by drought. He noted that during the 1953-1967 drought, the temperature was less than a half degree warmer than the historical average, compared with 1.6 degrees during the 2000-2014 period.

Udall said climate scientists can predict temperatures with more certainty than they can precipitation, so studying their individual effects on river flow can help water managers.

Rain and snowfall in the Colorado River Basin would have to increase 14 per cent over the historical average through the rest of the century to offset the effect of rising temperatures, he said.

“We can’t say with any certainty that precipitation is going to increase and come to our rescue,” Udall said.