Canada's emissions have fallen by about 20%; the reductions are unlikely to be permanent 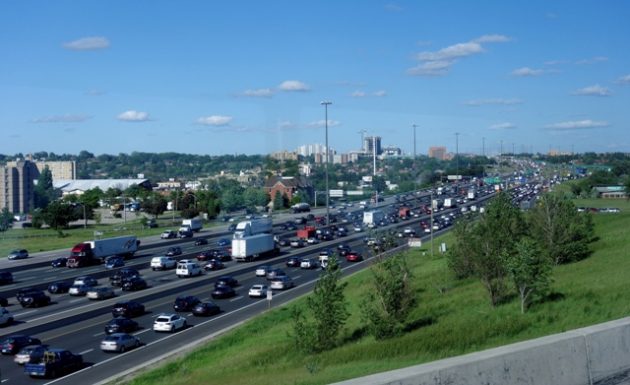 Slightly more than half all reductions worldwide were attributed to fewer emissions from surface and air transport. PHOTO: Steve, via Flickr

The authors of the study warn the figure shows climate change goals can’t be met by individual actions on their own.

“Behaviour change on its own can only do so much,” said Corinne Le Quere of the University of East Anglia in England. “You really need to have structural change.”

Figures for emissions of greenhouse gases aren’t normally available until after emitters have reported them. In this case, researchers used a variety of proxies to estimate releases of carbon dioxide and other climate-change-causing gases as countries brought in stiff measures to restrict individual movement and activity.

In all, the report published in the journal Nature on May 19 includes estimates of greenhouse gas releases in 69 countries representing 85% of the world’s population and 97% of global CO2 emissions.

Some countries’ emissions fell much further than the average. At their lowest, France’s emissions fell 34% with the United States not far behind at 32%.

“Canada as a whole did not reach the lockdown level that other countries did reach,” Le Quere said. “Canada has a lot of its emissions that come from power.”

Slightly more than half all reductions worldwide were attributed to fewer emissions from surface and air transport. Other major decreases came from a slowdown in power generation and industrial activity.

“We’re not celebrating a drop in emissions because people are out of work. It’s an unsustainable way to address climate.”

And the reductions are unlikely to be permanent.

Greenhouse gas emissions routinely fall during economic slowdowns and bounce right back afterward, as with the 2008 recession. China’s emissions have already almost returned to where they were before the pandemic.

What the study shows, Jackson said, are the limits of what can be achieved by individuals. The COVID-19 pandemic has imposed unprecedented controls on personal mobility in many western countries and thrown tens of thousands out of work — and that still resulted in getting less than one-fifth of the way to carbon neutrality.

Jackson and Le Quere said large emissions reductions will have to come from policy choices made by governments, such as electrifying power grids and providing infrastructure to allow a move away from gas-powered vehicles.

By the same token, said Le Quere, some policies that could be seen as economic stimulants for a post-COVID economy could have the opposite effect.

“We should not invest in building roads and making it easier to drive individual cars, because this is where the emissions come from.”

As governments figure out how to pull national economies out of their pandemic slumps, they have a choice to make, said Le Quere.

“Whether the national leaders will have the vision to really think hard about their economic stimulus package now and invest in more resilience toward climate change, that remains to be seen.”