Federal, provincial, territorial and First Nations leaders are gathering in Vancouver this week for the massive, biennial Globe clean-technology conference 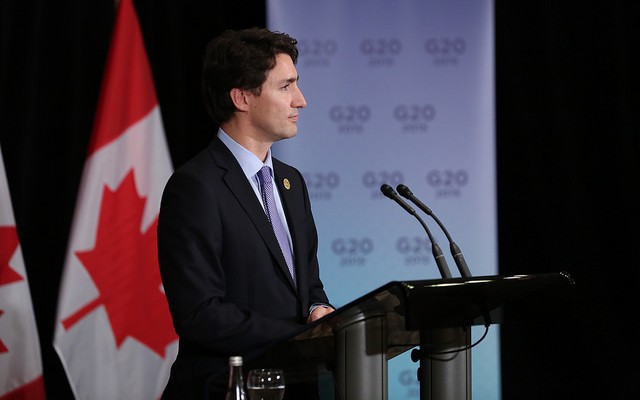 Prime Minister Justin Trudeau will present the keynote address at the Globe Conference in Vancouver March 2. PHOTO: Prime Minister of Canada, via Flickr

VANCOUVER—Canada’s first ministers have expressed their commitment to finding common ground in the fight against climate change, despite their sometimes conflicting views and priorities.

Prime Minister Justin Trudeau dismissed the suggestion that there is a regional divide when it comes to what Canadians and their leaders want for the economy and the environment, describing an abundance of perspectives as an asset as he heads into climate change talks with the premiers this week in Vancouver.

“When we look at that diversity and range of voices: yes, it’s a little more challenging to figure out that right place in the middle,” he said.

But he added that multiple perspectives ultimately “lead us to better solutions.”

Federal, provincial, territorial and First Nations leaders are gathering in Vancouver this week for the massive, biennial Globe clean-technology conference. Trudeau and the premiers are meeting with aboriginal leaders on Wednesday before a first ministers meeting on Thursday, Trudeau’s second since winning last October’s federal election.

“I’m very much looking forward to meeting with the first ministers this week to talk about the shared commitment that we all made in Paris a few months ago,” Trudeau said Tuesday at the launch of a cross-sectoral coalition looking to identify policies that spur innovation, generate jobs and boost the economy while improving the environment.

Speaking about the first ministers meeting, Ontario Premier Kathleen Wynne stressed the importance of looking for points of agreement and shared goals in order to avoid the discussions immediately devolving into a disagreement over details.

“Rather than beginning with a fractious conversation about which kind of carbon pricing (and) how it’s going to work, I think we have to start with our objectives: figure out how we can come to some agreement on what those are. Then we talk about the mechanisms,” Wynne said Tuesday in Toronto.

Each province could bring a unique approach, she added: “We don’t all have the same role to play, but we all do have a role to play.”

Wall has warned that putting a price on carbon emissions would “kneecap” his province’s energy-heavy economy, already struggling under slumping global commodities prices. Instead, he suggested Canada focus on investing in technological solutions to reduce emissions, such as carbon capture and sequestration.

British Columbia Premier Christy Clark said Tuesday she sees her province as a consensus-building force and hoped other provinces would follow its lead on introducing an economy-wide carbon tax.

She echoed Wynne’s comments on the importance of establishing common ground at the meeting’s start.

“Rather than spending all of our time talking about things we disagree on first, let’s talk about the things we agree on, first,” Clark said in Victoria.

She said she’s looking for financial backing from Ottawa for an estimated $1-billion project to install a hydro link between B.C. and Alberta.

The talks this week are also happening under the increasing spectre of national discord over the Energy East pipeline. On Tuesday, the Quebec government said it will seek an injunction to ensure the proposed project is subject to the province’s environmental regulations.

The announcement came a few weeks after a coalition of Quebec environmental groups said it would take legal action against Energy East for the same reasons.

Alberta has been pushing for the pipeline as a means for the province to get its oil to Eastern Canadian refineries and from there to international markets.