The Mount Polley dam collapsed at a gold and copper mine operated by Imperial Metals Corp., sending 24 million cubic metres of mine waste and sludge cascading into nearby waterways 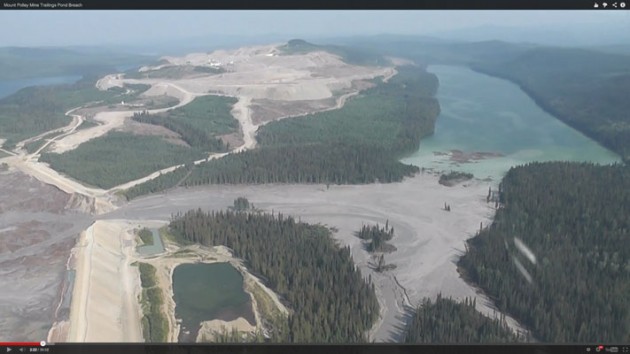 VANCOUVER—There will be no provincial charges for a tailings dam collapse in British Columbia but the province’s new environment minister says a mining company may still be held responsible through federal laws.

George Heyman said Wednesday the August 2014 disaster has had tremendous economic and environmental consequences and British Columbians deserve to know what went wrong at the Mount Polley mine located in the province’s Interior.

“A disaster like this should never have happened in B.C., and it must never happen again,” Heyman said in a statement, adding that charges under the federal Fisheries Act“ remain very much in play and, in fact, potential penalties are more significant.”

A three-year deadline on charges will pass Friday in the midst of an ongoing investigation by B.C.’s Conservation Officer Service, but Chris Doyle, deputy chief of the agency, couldn’t say what stage the probe was at.

The federal departments of Environment and Fisheries and Oceans are also part of the investigation.

“It’s an integrated investigation team,” Doyle said. “To date, the evidence has been collected under the provincial Emergency Management Act and the federal Fisheries Act and all of this information gathered during the course of this investigation will be considered by the Public Prosecution Service of Canada, should charges be recommended.”

The statute of limitations on federal charges will expire in two years.

The Mount Polley dam breached at the gold and copper mine, sending 24 million cubic metres of mine waste and sludge into nearby waterways.

Two reports, by B.C.’s chief inspector of mines and an independent panel of engineering experts, found the collapse involving the mine operated by Imperial Metals Corp. was caused by a poorly designed dam that didn’t account for drainage and erosion failures.

A scathing report in May 2016 by auditor general Carol Bellringer concluded that almost all expectations for government compliance and enforcement in both the Mines and Environment ministries were inadequate and “not set up to protect the province from environmental risks.”

The mine located near Quesnel Lake, about 400 kilometres northeast of Vancouver, resumed full operations last July with a repaired and reinforced tailings dam amid assurances by then-mining minister Bill Bennett that mining code revisions would ensure a similar disaster couldn’t happen again.

MiningWatch Canada launched a private prosecution of Mount Polley last fall for alleged violations of the Fisheries Act, but a B.C. provincial court shelved that bid earlier this year.

Ugo Lapointe, spokesman for the advocacy group, said Wednesday that British Columbians should be concerned about whether the province’s Emergency Management Act has enough teeth to lay charges in any future mining disasters or oil spills.

“If it is true that when you have such a big mining spill you can’t lay charges then what kind of an environmental disaster can bring any charges in British Columbia?” he said in a telephone interview from Ottawa.

Lapointe said the group is considering again whether to file private charges in the case.

“We’re looking at our options now, if there is a possibility to lay private charges under provincial laws. If that’s the only option left to do then that’s what we might do. But we have until Friday, and that’s coming very fast.”