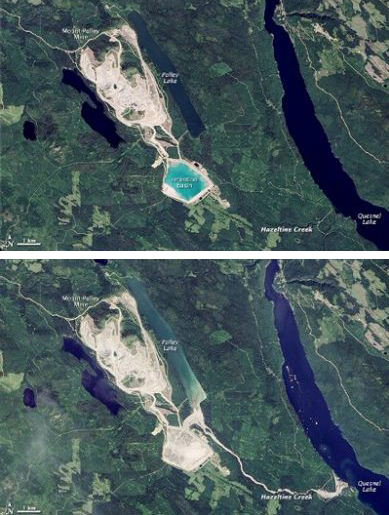 VANCOUVER—The owner of the Mount Polley mine in British Columbia’s Interior has sued two engineering firms for damages over a disastrous dam collapse two years ago.

None of the allegations has been proven in court and neither company has filed a statement of defence.

The lawsuit alleges a flawed tailings storage facility was designed and monitored by Knight Piesold from the late 1980s to 2011, and then by AMEC until its collapse in August 2014.

“Each of the defendants failed to undertake necessary, proper and reasonable investigation of the subsurface conditions underlying the (tailings storage facility) prior to and during its phased construction and operation,” the suit says.

As a result, the suit alleges, the facility had an inadequate safety standard, despite both companies repeatedly providing Imperial Metals with reports that claimed it was safe.

“Those reports were in error,” the suit contends. “The conduct of each of the defendants was negligent, was in breach of the applicable contracts and caused the ultimate failure of the (facility).”

The dam failed on Aug. 4, 2014, spilling 24 million cubic metres of waste and water into nearby lakes and rivers and forcing the gold and copper mine to close until recently.

A spokeswoman for Amec Foster Wheeler said the company could not comment on a matter that is before the courts.

“We continue to work with industry partners, professional organizations and regulators to ensure that the future of British Columbia mining prioritizes safety, accountability, and environmental responsibility,” said Lauren Gallagher in an email.

Knight Piesold did not immediately respond to a request for comment.

B.C.’s mines minister said last month that senior staff had authorized the mine to go back into full production, one year after it was approved for restricted operations.

In January 2015, an independent engineering panel appointed by the B.C. government concluded the dam failed because the strength and location of a layer of clay under the dam wasn’t taken into account during the design process.

The lawsuit was also launched on behalf of the Mount Polley Mining Corp., of which Imperial Metals is the parent company.

The company doesn’t specify the amount of damages sought, but alleges it continues to incur losses as a result of the dam failure, including lost profits, the costs of laying off employees and reduced share values.

The lawsuit says the province has already found the Mount Polley Mining Corp. liable to pay $3.2 million to cover the costs of the engineering panel and spill clean-up, and wants compensation from the two companies.

Another independent investigation into the disaster, led by the B.C. Conservation Officer Service, is still ongoing. The RCMP and federal Department of Fisheries and Oceans are also part of the investigation.