B.C. at risk of being left behind as global economy cleans up its act

The Pembina Institute's B.C. Director Josha MacNab breaks down the key ways the province can go about building a clean economy 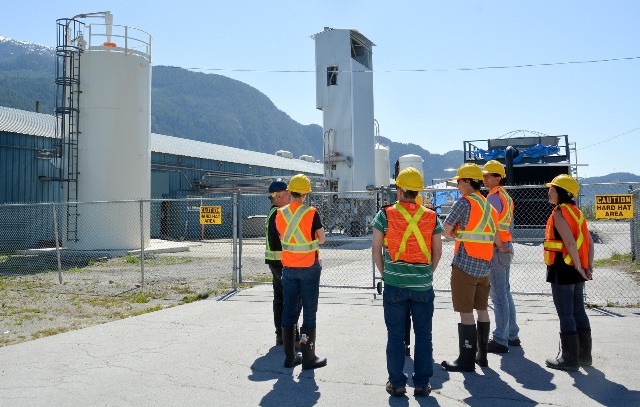 Providing funds for demonstration projects is one of the ways B.C. can build its clean economy, MacNab says. Cleantech firm Carbon Engineering is currently piloting a new carbon scrubbing technology at a plant in Squamish, B.C. PHOTO: Stephen Hui/Pembina Institute

VANCOUVER—British Columbia is at risk of being left behind as the global economy shifts and the costs of a changing climate begin to mount. Building a strong clean growth economy is imperative to ensure Canada’s westernmost province remains competitive.

The Pembina Institute has put forth Vision for Clean Growth in B.C., an action plan that lays out five key priorities for building the clean economy. Priority number one: Build a strong clean technology sector.

The global cleantech market is currently worth $1.15 trillion, according to Analytica Advisors. In 2015, the sector in Canada reported $13.3 billion in revenue. Roughly 80 per cent of the products from Canadian cleantech companies are exported—valued at $16.5 billion. Yet, while exports are growing in this sector, Canada’s overall share of the cleantech pie shrunk by 12 per cent between 2008 and 2015.

The story is more positive in B.C., which today is home to 14 per cent of cleantech jobs in Canada. B.C.’s cleantech sector reaped an estimated $1.8 billion in revenue in 2016, an increase of 20 per cent from 2014. A recent report from the B.C. Cleantech CEO Alliance establishes that the sector is growing in the province: the number of cleantech companies is up 35 per cent in the past six years, and the amount of equity raised is also up 25 per cent to $6 billion.

There is huge potential to grow here, but B.C. is at risk of falling behind if we don’t act now.

Leading cleantech CEOs have called on the provincial government to play an active role in making B.C. a global magnet for investment in cleantech ventures, and scaling-up technologies through loan guarantees, tax credits, and government procurement, among other actions. Cleantech CEOs have also identified consistent and predictable pricing of carbon pollution as a key factor in supporting the growth of the sector.

B.C. was the first jurisdiction in the world to introduce a revenue-neutral carbon tax, and others have caught on. Today, 25 per cent of global carbon pollution is already or about to be covered by a carbon price. This represents over 40 countries, including seven of the world’s 10 largest economies. Clearly, carbon pollution pricing has gone mainstream. Governments worldwide now recognize it as a key component of any effective emissions reduction strategy.

In addition, policies and incentives that spur innovation and drive demand for low-carbon goods and services are necessary. Examples include an aggressive building retrofit strategy for B.C., and a new zero-emission vehicle standard.

In short, here are six ways that B.C. can build a strong cleantech sector:

Our Vision for Clean Growth in B.C. outlines four more key priorities for the next B.C. government: (1) Position B.C. to be competitive in the changing global economy, (2) Make clean choices more affordable, (3) Stand up for healthy and safe communities, and (4) Grow sustainable resource jobs.

Taking action on these five priorities will help propel B.C. back to forefront of international progress, while building and maintaining healthy, thriving communities across the province.