Trudeau, Obama and Mexican President Enrique Pena Nieto tackled a number of policy issues but didn't waste the chance to take shots at "The Donald" 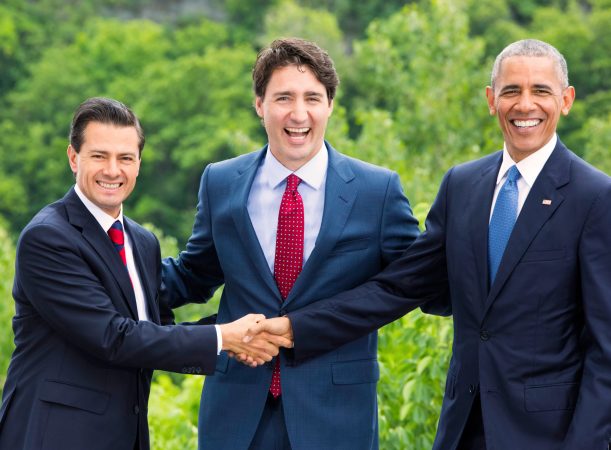 Here are five things linked to the economy that came up during Justin Trudeau’s meeting with Barack Obama and Enrique Pena Nieto, as described by a communique from the Prime Minister’s Office:

1. The leaders committed to address border issues and help businesses by aligning their customs processes and requirements as much as possible. Customs authorities in each country are working toward providing businesses with a “national single window online portal” where they can submit information required to comply with respective border regulations. The leaders also agreed to launch a joint study to prioritize and propose implementation strategies with a goal of determining whether alignment is possible.

2. They signed a memorandum of understanding to strengthen women’s entrepreneurship in North America by helping promote and expand women-owned companies across the continent. They will also aim to improve women’s access to global value chains and to international trade. They called for a boost to mentorship and the sponsorship of a Canadian-American trade mission to Mexico for businesswomen by 2017.

3. The leaders agreed to promote something called “cluster asset mapping,” which is described as “an activity that helps policymakers, businesses, and other stakeholders gain a solid understanding of a region’s economic strengths and opportunities.” The maps are designed to pinpoint clusters of interconnected companies and suppliers as a way to help firms grow their labour and supply chains. A goal is to help back local efforts to build and attract new industries.

4. On the Trans-Pacific Partnership, the leaders will work to complete their respective domestic processes. Obama and Pena Nieto have endorsed the controversial 12-country Pacific Rim treaty. The Trudeau government, however, has indicated a review of the deal, negotiated by the Conservatives, is necessary before Canada ratifies it.

5. The countries agreed to make amendments to the rules of origin in the North American Free Trade Agreement. The changes are aimed at liberalizing rules of origin, and reducing costs, for products such as pharmaceuticals, cosmetics, rubber, metals, industrial and electrical machinery, precision instruments, and natural gas. Such goods make up $166 billion per year in trilateral trade.

Here are a few quotes from the three leaders in response to questions from the press:

Barrack Obama: “I’m not prepared to concede the notion that some of the rhetoric that’s been popping up is populist … Somebody … who has never shown any regard for workers, has never fought on behalf of social justice issues or making sure that poor kids are getting a decent shot at life or have health care, in fact have worked against economic opportunity for workers and ordinary people, they don’t suddenly become a populist because they say something controversial in order to win votes … That’s nativism or xenophobia or worse or it’s just cynicism,”

Justin Trudeau: “One of the things that’s easy to forget amid the inflated rhetoric of an election campaign is that the relationship between our three countries goes far deeper than any individual leader,”

Obama: “The integration of national economies into a global economy, that’s here. That’s done. So the question is not whether or not there’s going to be an international global economy—there is one.”

Trudeau: “Today’s climate agreement stands as proof that co-operation pays off and that working together always beats going it alone.”

Enrique Pena Nieto: “The North American Leaders’ Summit bears witness that isolated national efforts are insufficient if we want favourable results for the benefit of our societies. It is better to work together as a region … Isolationism is not a solution.”

Trudeau: “Always, there will be people trying to get us all to turn inwards, but the fact is our world is interconnected in so many ways that it is much better that we engage, that we work through our challenges together, because really that’s how we end up with the kind of growth that benefits our countries and our citizens.”

Obama: “Countries like ours that have high labour standards and high environmental standards and strong protection of intellectual property and rule of law, we’ve got to get out there and help to shape those (global trading) rules so that they work for our workers and our businesses. Because if we don’t, China will write the rules and they might not have the same regard for the values that we care about.”

Trudeau as he introduced Obama in the House of Commons: “Now, finally, this House gets to see a ‘bromance’ close up. Thanks for making that possible. Although I still think ‘dudeplomacy’ is more accurate, but I’ll get over it.”

Obama: “Canada was the very first country I visited as president. It was February. It was colder. I was younger. Michelle (Obama) now refers to my hair as the Great White North. And on that visit, I strolled around the Byward Market, tried a beaver tail, which is better than it sounds.”

Obama: “The world is more prosperous than ever before but alongside globalization and technological wonders, we also see a rise in inequality and wage stagnation across advanced economies … If the benefits of globalization accrue only to those at the very top, if our democracies seem incapable of ensuring broad-based growth and opportunity for everyone, then people will push back out of anger or out of fear and politicians, some sincere and some entirely cynical, will tap that anger and fear.”