Joe Sestak, the president of FIRST Global, says the teams denied visas that they will be Skyping into the competition as their robots are presented. Teams from forty other African nations were granted Visas for the competition 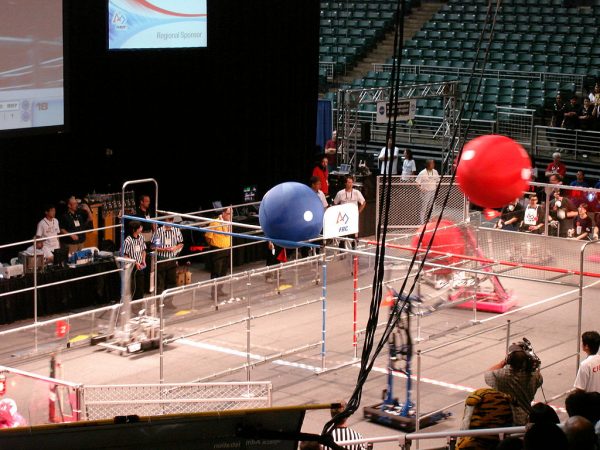 A view of the competition floor during First Hawaii regionals.

Darboe said the students were not given a reason for the visa denials in April, and he called the decision “disappointing and unfair.”

The Gambia team is not alone. An all-female team from Afghanistan also was denied visas.

The U.S. Embassy in Banjul could not immediately be reached for comment.

Tiny Gambia has been through dramatic change in recent months, ousting via elections a longtime dictator, Yahya Jammeh, whose administration was accused of human rights abuses. The new administration, inaugurated in January, has promised widespread democratic reforms.

Gambia’s government has put forth the money for another round of U.S. visa applications for the robotics team members, and the teens are being interviewed again Wednesday, Darboe said. The students’ creation was being shipped Tuesday to the competition.

“We will go for an interview and hope for the best,” he said. Each student had to pay a fee of more than $160 for the visas and travel for the interviews.

For months, the team has worked on a machine that sorts balls as part of an effort to simulate solutions for separating contaminates from water.

FIRST Global holds the annual robotics competition to encourage learning in Science, Technology, Engineering and Mathematics, or STEM, around the world. It invites one team from each country in an effort to build bridges, organizers said. This year’s competition takes place from July 16-18.

Gambia team member Fatoumata Ceesay, 17, said she hopes their second interview will get them to the U.S., but she was not optimistic.

“It’s very disappointing knowing that we are the only two countries that aren’t going to take part in the competition,” she said. “It would be an experience to see and discover other robots and ask questions and exchange ideas with others. It’s more than 160 countries, so we’d have the chance to mingle.”

The aspiring engineering student said she was grateful for the opportunity to work with the team and learn about building robots.

“This is the first time I’ve worked on a robot … The experience is so amazing,” she said.

If team members are denied visas again, the Gambian American association will represent the robot at the competition, Ceesay said.

Joe Sestak, the president of FIRST Global, said he has already promised the Gambia and Afghanistan teams that they will be Skyping into the competition as their robots are presented. “We still are making them a part of this,” he said.

Afghanistan has had a U.S. visa refusal rate of 75 per cent and Gambia 70 per cent, Sestak said.

Overall, he called the visa approval rate unprecedented, saying that “we had an extraordinarily fair process.” FIRST provided letters of support and informed teams about the questions that might be asked during interviews.

Forty African nations will be among those attending the competition.

“For Gambia I feel just as saddened. We started this effort in Africa,” Sestak said, adding that his organization hopes to hold the competition in various countries in the future to encourage wider attendance.