"We do a lot of investments in the auto sector in China, as well as in Korea and Japan, and I will continue to do that until somebody gives me a sign that I should stop," John Chen said 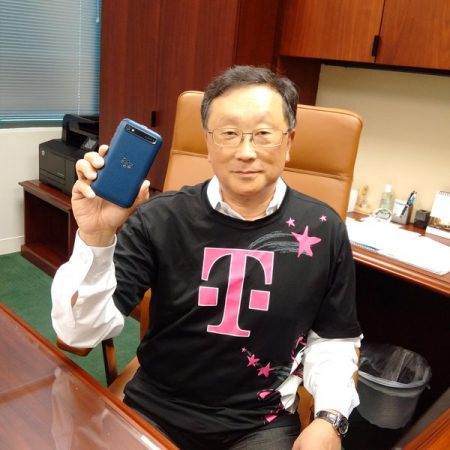 TORONTO—The CEO of BlackBerry Ltd. said Thursday he hasn’t seen any indication that recent political tensions between the governments in Beijing, Ottawa and Washington are affecting the company’s long-term business prospects in China.

John Chen said he’s optimistic there will be a resolution of the diplomatic dispute that erupted after Canada arrested Chinese businesswoman Meng Wanzhou in Vancouver on Dec. 1 at the request of the United States.

“We do a lot of investments in the auto sector in China, as well as in Korea and Japan, and I will continue to do that until somebody gives me a sign that I should stop,” Chen said in an interview after BlackBerry issued third-quarter results Thursday.

In fact, Chen has been positioning BlackBerry and its QNX subsidiary to be major suppliers to the global automotive industry, through various agreements with automakers, Tier 1 parts suppliers and chip manufacturers.

Included in its pipeline of projects is an agreement to design BlackBerry software into the Apollo operating system for self-driving vehicles, which is being developed by Chinese search-engine giant Baidu.

“They’re (trying) to sell these platforms to car manufacturers, especially in China. And they’d like to make it more of a standard around the world, obviously. And we’d like to help them too,” Chen said.

But revenue from the Apollo project won’t begin to flow to BlackBerry until it’s built into vehicles and the manufacturers begin to pay royalties on the licensed intellectual property.

“That’s the nature of this particular business,” Chen told analysts in an earlier conference call.

“The good thing is . . . once you’ve started revenue coming, the flow is not only predictable and ramping slightly over the life cycle, it’s a long flow.”

He said that BlackBerry is beginning to see the positive impact of design wins that the company announced two to three years ago, and that there’ll likely be another step upward in about a year after later royalty agreements start to pay off.

It earned US$59 million in net income for the quarter ended Nov. 30, up from a loss of US$275 million in the same quarter last year.

The profit, which BlackBerry reports in U.S. currency, amounted to 11 cents per basic share for the most recent quarter compared with a loss of 52 cents per share a year ago.

The company’s adjusted profit for the quarter ended Nov. 30 was five cents per share, up from three cents last year.

Revenue totalled $226 million, which was even with last year’s third quarter and up from $210 million in the second quarter this year.

Analysts on average had expected an adjusted profit of two cents per share and revenue of $212.5 million, according to Thomson Reuters Eikon.

Software and services accounted for $217 million of revenue, up from $190 million a year ago, while handheld device sales—which have been declining for years—contributed no revenue in this year’s third quarter.

Several analysts have said they are waiting for BlackBerry revenue to begin increasing on the strength of its newer business ventures. Some have suggested BlackBerry’s US$1.4-billion acquisition of Cylance, a U.S. artificial intelligence and cybersecurity firm, may help revenue in the long term but the deal isn’t expected to close until February.

The transaction has recently passed one of the key regulatory hurdles, under the U.S. Hart-Scott-Rodino anti-trust act, and Chen said Thursday that BlackBerry will now have more freedom to discuss Cylance with customers.

“These cybersecurity capabilities will fit nicely with everything we do,” Chen said.