The world's largest boring machine broke down shortly after starting its subterranean trek in 2013, but has finally finished a massive tunnel that will house a four-lane highway 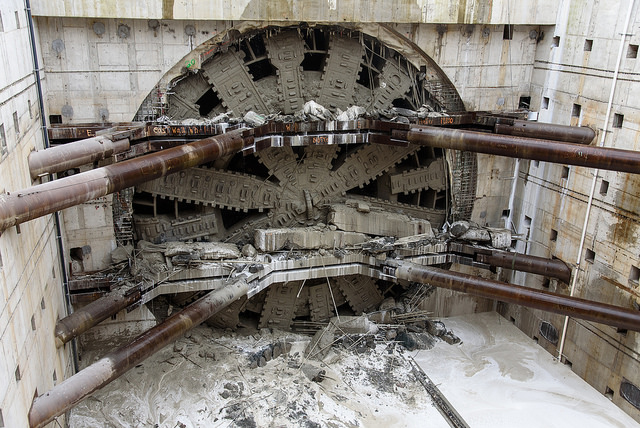 The enormous tunneling machine broke through its final concrete wall beneath the West Coast city this week. PHOTO: Washington State Dept. of Transportation/Flickr

SEATTLE—The world’s largest tunnel-boring machine broke through a concrete wall beneath Seattle April 4 to reach the end of its long, troubled journey, a milestone in a multibillion-dollar project to replace an aging highway hugging the city’s waterfront.

Critics of the effort to build an underground roadway called it an overpriced endeavour that would collapse under the weight of its ambition and mounting costs. For a while, they looked to be right as the machine, known as Bertha, broke down soon after it started drilling in 2013 and didn’t crank up again until last year.

Bertha has finally capped its 1.75-mile (3-kilometre) journey, which the state Transportation Department and some media live-streamed online. Social media users posted memes about the time it took to reach this moment, when the giant machine cut through the final pieces of concrete in a 5-foot wall, filling the air with dust.

“Today is a major construction milestone in our plan to reclaim Seattle’s waterfront,” Mayor Ed Murray said. “We will build a waterfront for pedestrians, transit and sensible car trips without a freeway wall casting a shadow over our vision of a well-connected 21st century city.”

Crews will break down Bertha as others prepare the inside of the tunnel to handle double-decker lanes of a $3.1 billion underground highway project that will replace the Alaskan Way Viaduct, which was damaged in a 2001 earthquake. The tunnel is set to open in 2019, three years behind schedule.

Proponents say the viaduct will no longer wall off Puget Sound. Some conservative lawmakers slammed the project as an expensive vanity project, and environmentalists objected to building another highway in Seattle.

“This is a historic moment in our state’s transportation history,” said Washington Gov. Jay Inslee, adding that it was a time “to reflect on the incredible level of innovation and skill needed to get to this point.”

Republican state Sen. Michael Baumgartner of Spokane, a member of the Transportation Committee, called the project “a tragedy of errors.”

“Only in bonkers, leftist Seattle would an absurdly stupid project that’s massively behind schedule and over cost, would finishing be considered a success,” he told The Associated Press.

Bertha had only drilled about 1,000 feet (305 metres) of its 9,270-foot (2,826-meter) trek when it hit a steel pipe and ground to halt in December 2013. Crews dug a pit to reach the machine so it could be pulled out and repaired. Exactly what caused Bertha to stop drilling will be the subject of litigation between the state and the contractor.

The removal of water near the pit sparked concerns about the ground in the area settling and posing a danger to pipes, buildings and roadways. Some businesses reported cracked walls, and monitors detected ground movement near the pit.

Officials ultimately decided the movement stemmed from activity in the pit and natural causes. After being shut down for more than two years for repairs, Bertha began digging again in 2015.

Officials also expressed concern when a barge carrying excavated soil began to tip and dropped material into the water. The spill posed a hazard to tunnel workers and the public.

The courts will decide who will pay for the hundreds of millions of dollars of cost overruns and delays.

Seattle Tunnel Partners and its insurance companies sued in 2015, claiming the state was at fault for Bertha’s breakdown. The Department of Transportation responded with its own lawsuit, seeking unspecified damages because of the delays caused by the breakdown.