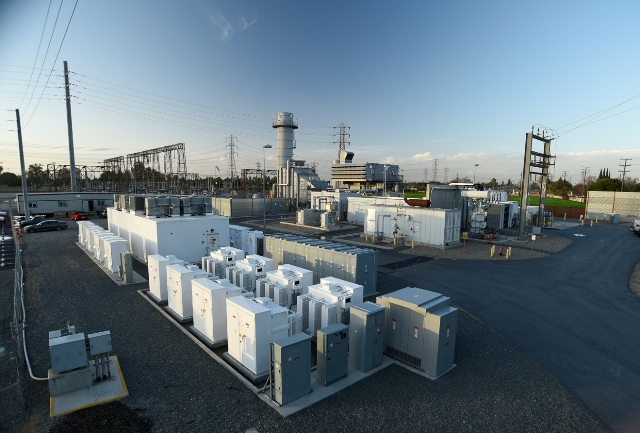 NORWALK, Calif.—A California utility has launched unique systems combining a hybrid battery and gas turbine to produce and store electricity for use during hot summer months and other times when power demand soars.

The new Hybrid Electric Gas Turbines are the first of their kind in the world, officials with Southern California Edison and manufacturer General Electric said during an event April 17 near Los Angeles.

Edison President Ron Nichols said the twin systems that went online March 30 operate somewhat like a hybrid car—drawing first on the battery, then switching over to the gas turbine if power demands spike.

Energy output is combined between turbines and new 10-megawatt lithium-ion battery storage units. As a result, the systems do not burn fuel when they’re on stand-by, significantly reducing greenhouse gas emissions. And they can be turned on immediately to push power into the grid to compensate for outages or increased demand.

“The battery is there at the flick of a switch,” Nichols said.

The systems are running in Norwalk and Rancho Cucamonga at plants built to provide extra juice following an especially hot summer that strained the grid. The utility is exploring adding the hybrid systems to three other similar plants.

“You don’t always get an opportunity to take an existing facility, add some new technology to it, and enhance the value and reduce the cost to customers,” Nichols said, calling the new systems “win-win.”

The systems will help balance energy supply and demand, especially during evening hours when solar power production drops as customers return home and turn on lights and appliances.

California has committed to derive 50 per cent of its electricity from renewable sources by 2030. The installation of the hybrid systems is a major step toward that goal, according to Tom Doughty of the California Independent Systems Operator, which manages the state’s grid.

“The variability of one technology, or one plant, can be mitigated or managed by others,” he said, calling the new system “a thing of beauty.”