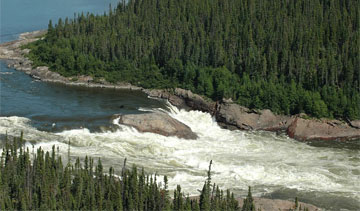 Muskrat Falls. When its generating station is complete, it will have a capacity of 824 megawatts and annual energy production of 4.9 terawatt hours. PHOTO: Nalcor Energy

The committee led by the clerk of the executive council recommended Crown corporation Nalcor Energy expand its internal audits, which it has agreed to do.

This extra layer of oversight is on top of regular visits by an independent engineer that reports to the federal government.

The joint project with energy company Emera would bring power from Muskrat Falls in Labrador to Newfoundland then Nova Scotia.

Nalcor Energy said in June that costs had risen by almost $800 million mostly due to higher construction costs and competition for labour.

The proponents behind Muskrat Falls are aiming to have first power produced December 2017.