Wind, solar to ‘dominate’ electricity grid by 2040, snap up trillions in investment

The cost of renewable power will plummet over the next two decades, while emissions in the power industry will peak in 2026, a new BNEF report says 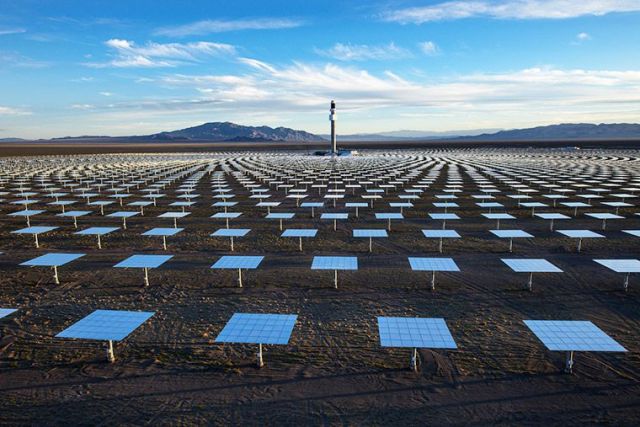 Solar power costs are expected to decline another 66 per cent by 2040 while attracting $2.8 trillion in investment. The Crescent Dunes solar plant in Nevada seen here. PHOTO: SolarReserve

NEW YORK—With few obstacles left to circumvent, the rapid decarbonization of the world’s power system is expected to continue to barreling forward over the next two decades.

According to a new report from Bloomberg New Energy Finance, renewable power will collect nearly three-quarters (72 per cent) of the US$10.2 trillion spent on new power generation worldwide between now and 2040.

“The greening of the world’s electricity system is unstoppable, thanks to rapidly falling costs for solar and wind power, and a growing role for batteries, including those in electric vehicles, in balancing supply and demand,” Seb Henbest, the report’s lead author, said in a statement.

Solar will see the biggest gains over the next 23 years. The cost of cells is forecast to drop a further 66 per cent by 2040, allowing the solar market to grow to $2.8 trillion—14-times its current size. Wind power costs, meanwhile, will experience a 47 per cent decline as the segment scoops up $3.3 trillion in investment. By 2040, solar and wind will make up 34 per cent of the globe’s electricity generation, compared to just five per cent today.

And as clean power ascends, fossil fuels will wane.

BNEF anticipates coal-fired power collapsing in both Europe and the U.S., dropping 87 per cent and 45 per cent respectively over the next decade—though it won’t peak in China until 2026. The research organization also said several hundred gigawatts of planned coal plants will likely be cancelled over the next several years, adding that despite the Trump administration’s vocal support for the sector, economic realities will continue to eat away at the American coal industry over the next 23 years. 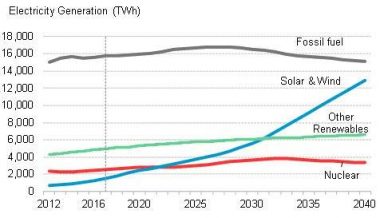 With coal fading, the report forecasts emissions in the power industry will peak in just under a decade. After the 2026 high-water mark, emissions are expected to decline to four per cent below 2016 levels by 2040.

Coal may be the big loser over the next two decades, but fossil fuels won’t be down and out entirely. Natural gas is expected to take over as a sort of “transition fuel” and attract $804 billion in investment by 2040.

“Gas plants will increasingly act as one of the flexible technologies needed to help meet peaks and provide system stability in an age of rising renewable generation, rather than as a replacement for ‘baseload’ coal,” the report says.

Energy storage is yet another piece of the puzzle. The lithium-ion battery storage market alone is expected to be worth $239 billion between now and 2040, while other emerging technologies could also play a role in ensuring renewable power is available at any time of day.

While the trillions of dollars destined for clean power projects is a positive step for global emissions, BNEF says the major wind and power push will still not be enough to halt rising temperatures to within the two-degree target established at the Paris climate conference in 2015. To reach that goal, the research organization says a further $5.3 trillion investment in zero-carbon capacity would be needed.